Home » DANCING WITH THE STARS Recap: NBA player Ron Artest is out of the game 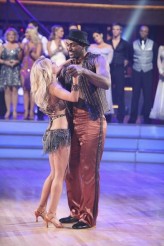 And so it begins…the first elimination of DANCING WITH THE STARS season 13 has commenced and Ron Artest or whatever his name is now (Metta what?) is cast away. There’s no suspense in his departure, after all, he did receive the lowest scores and maybe, just maybe, people weren’t buying his Dennis Rodman like antics. Still, it is hard to be the first one to walk off the floor and Artest did it with grace and humility.

Two hours earlier we were treated to a meet the cast episode showing all the cast members meeting their counter pros for the first time. Then, a few celebrity audience members cast their votes on the new contestants including Ralph Macchio, Courteney Cox, Paul Reubens, Khloe Kardashian and Patricia Arquette. Unique to the pre-results show was the encore dance pick, which went to Carson Kressley and his partner Anna Trebunskaya.

When the “real” results show began the pros opened the show like, well, pros. It was fast, bouncy and fun. It made me realize how much I missed the show during the last four months. Has it really been that long? Wow, time flies while you swelter in the summertime.

After a yearlong break from DWTS, Derek Hough and his star companion Ricki Lake were first to be told they were safe. Second was Elisabetta Canalis and her partner Val Chmerkovskiy – could there really be someone more sexually cocky than Maks? I think so.

An interlude with the stars meeting with each other passed the time away while we waited for the third and fourth couples to be saved. Also a nice treat while we waited was a very sultry performance from Harry Connick, Jr., always a crowd pleaser. Then quickly back to the dance race – Hope Solo and Maks Chmerkovskiy were safe as well as Kristin Cavallari and Mark Ballas.

A few new members to the DWTS dance troupe took us off course just a bit followed by a performance from the troupe. Soon, LMFAO performed with a few pros. How would I categorize them? I’m not sure. Funky, I guess.

Fifth safe were Chynna Phillips and Tony Dovolani; sixth were J.R. Martinez and Karina Smirnoff and seventh were Chaz Bono and Lacey Schwimmer. After co-host Brooke Burke Charvet interviewed the remaining couples, the three duos leapt onto the stage to find out who was first to go. Rob Kardashian and Cheryl Burke made it through and then it was down to Nancy Grace with partner Tristan Macmanus and Ron Artest along with partner Peta Murgatroyd. Cue deep dark baritone music… dum dum dum dum….Ron Artest has left the building.

Click on Link: Review and Recap of DANCING WITH THE STARS – Season 13 – Week 1