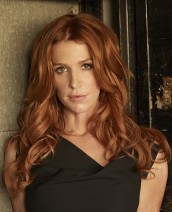 An okay crime procedural with a quasi-familiar twist

Some crime procedural TV series have a genuinely original take on how to tell stories about murder investigations. Many other crime procedurals copy one another, changing a few details to avoid confusion and lawsuits.

UNFORGETTABLE is one of the latter. True, no other character on television has our heroine Carrie Wells’ (Poppy Montgomery) condition, a rare but true-life condition, Superior Autobiographical Memory, that allows for total recall of what she sees, hears and experiences. When we first meet Carrie, she is using her ability to win money at card games, but we soon learn she used to be a homicide detective. Carrie gave up her badge and her relationship with fellow detective Al Burns (Dylan Walsh) because she became obsessed and burned out with solving the one case she can’t remember – the murder of his sister when both of them were children. Now, however, Carrie is drawn back into helping the police when Al investigates the murder of one of Carrie’s neighbors. Carrie is reluctant, but she has a strong sense of justice, and when it comes down to it, she has a gift.

There’s nothing particularly wrong with UNFORGETTABLE, apart from how familiar it all feels. True, we’ve never seen a character who specifically has Superior Autobiographical Memory before (actress Marilu Henner, an advisor on the series, is someone who possesses this trait), but we have seen plenty of detectives, with and without badges, who have great memories and deductive skills, from Sherlock Holmes onward. Indeed, THE MENTALIST, which has a somewhat similar hero, is alive and well on CBS, the same network now bringing us UNFORGETTABLE. Montgomery is personable and conveys reasonable integrity. The way director Niels Arden Oplev (of the Swedish film adaptation of THE GIRL WITH THE DRAGON TATTOO) visualizes Carrie’s memories of her own actions – she stands to one side, watching her remembered self progress through what happened – is reasonably cool.

The murder mystery is okay, though the pilot makes us wonder exactly how Carrie’s skills will be employed in future, as much of the opener relies on coincidence – she remembers things she’s seen and heard from sites relevant to the investigation because she saw them before a crime was committed. Surely the show can’t give Carrie this advantage in every episode.

Based on the pilot, UNFORGETTABLE is serviceable but unmemorable, as we’ve seen too many shows like it already.