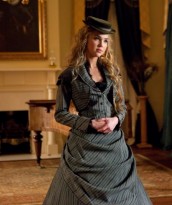 The dagger to kill original vamps is a one shot deal ... so what now?! 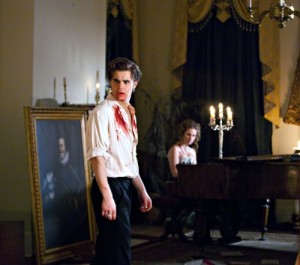 Well, last week’s episode of THE VAMPIRE DIARIES was OK, but this week was a really strong episode with a lot of important developments!

“The Dinner Party” got some powerful stuff done, and let’s just start off with the death of Elijah (Daniel Gillies). So the dagger was used and yes folks it did kill him, but you have to leave it in, so he came back and through a very clever double cross/double cross Elena (Nina Dorbrev) takes him out herself. This time they have to make sure to leave it in for him to stay dead. So my big question is what happens when Elijah’s big bad comes to town looking for all of the pieces to break the curse? The dagger only had one use in it, and they took it, so what the hell do they use now?!

One of the best things about this episode was the series of flashbacks into Stefan’s (Paul Wesley) past. There were some very nice INTERVIEW WITH A VAMPIRE scenes involving various ladies that Stefan was munching on and being a very bad boy. Again, it’s interesting to see the past where Damon (Ian Somerhalder) is the voice of reason. I like the softer side of Sears version of Damon, and he’s just as pretty to look at without the bad attitude (although truth be told who doesn’t love a bad boy vampire?).

The flashbacks also brought in a surprise guest star in the form of Stefan’s best vamp bud Lexi (Arielle Kebble). Lexi was a character that seemed like a great addition to the first season of this series – only to be snuffed out well ahead of her time, so it was nice to have her back even if it was only for a little bit. There was also a really nice exchange between Stefan and Damon talking about Lexi, and Damon actually looked remorseful that he had killed her.

Bonnie (Katerina Graham) and Jeremy (Steven R. McQueen) got up to some magical hanky panky, only to have Elijah’s pet witch blow in and muzzle Bonnie’s powers. Now again what they hell is team Salvatore going to do? They’ve lost another key piece of their power base, their witch can’t access her magic anymore! I guess they could call on Catherine’s (Nina Dorbrev) witch to see if she can help.

Speaking of Catherine, nice to see she hasn’t lost her touch in manipulating everything so she can get out of the tomb. Her exile didn’t last very long, and that’s OK because I love seeing Nina play both Elena and Catherine. It’s such a nice flex of her acting abilities and she’s so much fun when she’s playing evil. Of course, when she was around earlier in the season I joked that Nina had such a tough job to have to make-out with all of the hottest guys on the show!

Lots of different elements are rolling downhill now, and it’s only a matter of time before all of this explodes to a head. So hang on tight kiddies the ride can only get bumpier from here.