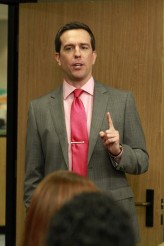 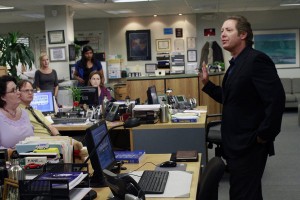 For the second episode of the eighth season of THE OFFICE, the pains of moving on without Steve Carell are still being felt. Even though he was long gone by the latter half of last season, he was still there in spirit.

Now, THE OFFICE is trying to move on, reworking its premise, moving some characters around and desperately trying to find out what works and what doesn’t.

Seeing an established show transform itself into a “work in progress” is hard to do. TWO AND A HALF MEN and LAW & ORDER: SVU are struggling to do just that with the loss of their respective male leads this season (Charlie Sheen, Christopher Meloni). It’s hit and miss though, because a series literally has to reinvent and reintroduce itself to ardent fans who would prefer there were no change at all.

I enjoyed last week’s THE OFFICE season premiere  “The List”, but am less enamored with “The Incentive” which turned out to only be half of a decent episode.

New CEO Robert California (James Spader) shows up to put terror in the hearts of the Dunder-Mifflin employees as usual, and he gives marching orders to new manager Andy Bernard (Ed Helms) to double the sales growth of the company. Andy, confused as ever to why he was put into a position of power, tries to use an incentive to get everyone in the office to work harder. This results into him saying he’ll get a tattoo on his rear if they exceed expectations.

Once the episode kicks into gear, it ends up being pretty funny and even the ending has a little bit of poignancy to it. It’s clear Andy is a different kind of boss, but after seven years of Carell’s bumbling and inappropriate Michael Scott, it’s refreshing to see a completely different type of person take the dominant role.

Spader is still finding himself as California, and he is one of the better parts of this episode.

Not working is the weird obsessive relationship Angela (Angela Kinsey) is having with Pam (Jenna Fischer) on the show. With both characters pregnant, Angela continually butts her nose into Pam’s pregnant business and it’s not funny at all. Lose this subplot quickly.

The other problem with this episode is how it completely drops what seemed like a minor subplot for no reason. A big deal was made that Darryl (Craig Robinson) had reconciled with his estranged wife, but there was no pay-off.

The cold opening with Kevin (Brian Baumgartner) speaking in a way that leaves out every other word was painfully unfunny – and reminds you how much Carell is missed.

I’ve always been a big fan of THE OFFICE, and yes, it’s not the same without Carell, but even with Carell, the last couple of seasons have been largely uneven as well. I’m willing to give the series some more time to find itself – and it’s in good hands with Helms and Spader at the fore – but it’s going to take a little more time to find itself and get a better rhythm going. Yes, it’s very different, but at least it’s still interesting and that’s more than you can say about most series entering into their eight year.