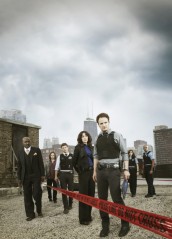 Could this be the next great drama Fox has been looking for? Hell yes!

It’s been some time since a network drama has stormed out of the gates and made you sit up and take notice. Fox’s new drama THE CHICAGO CODE created by THE SHIELD’s Shawn Ryan is that show.

THE CHICAGO CODE is without a doubt one of the best new shows of the new season – and it’s a shame it’s taken five months for it to rear its glorious head.

The series is set in Chicago and follows the city’s first female superintendent Teresa Colvin (Jennifer Beals) whose goal is to take down corruption in the city from the inside out. She’s putting together an unofficial task force, and number one on her list is Alderman Ronin Gibbons (Delroy Lindo). He’s the second most powerful man in the city and dirtier than anyone else. He even assigned Colvin to her position – thinking she would be his puppet, but now she’s doing everything she can to take him down without him realizing what she’s up to (that’s sure to change).

Part of her unofficial team is her ex-partner Jarek Wysocki (Jason Clarke) who is willing to help Colvin temporarily, but then realizes how insane the stakes are and agrees to join her until the job is done. Caleb Evers (Matt Lauria) is a young rookie and Jarek’s new partner.

The plot is dense – this is not a close-ended procedural transforming THE CHICAGO CODE into a fast-paced serialized drama that starts off fast and ends fast. It’s an incredibly well written piece of television, directed with visual panache by Charles McDougall.

It’s also fitting that they’re actually shooting the show in Chicago – which lends the series authenticity and an incredible visual palette to play with.

The cast is strong too, from Beals tough, but vulnerable superintendent to Lindo’s formidable antagonism. He’s all honey and biscuits this first episode, but you know his dark side is going to rear its ugly head in the weeks to come.

The real find though is Clarke as Wysocki. He’s so good straddling the line between confidence and cockiness – and he steamrolls through every scene with a quirky urgency that it shakes up the tired police formula and what you normally expect from your beat cops.

The entire cast is solid, but the story is king here and Ryan has set into motion a sprawling saga that’s just getting started. Fox has needed a solid action drama since 24 went off the air, and if subsequent episodes hold up as good as this Pilot, I’m confident that THE CHICAGO CODE will be their next great drama. Let’s hope Middle America feels the same way too.