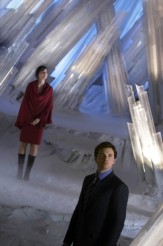 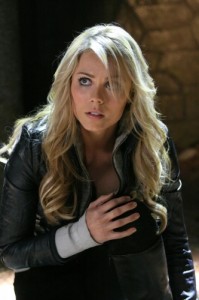 First though, there’s a bunch of messy business that needs to get tidied up (or messed up). There’s one more trial that Jor-El (voice of Terrence Stamp) wants to impart on Clark. So when he announces to Jor-El he’s going to marry Lois Lane (Erica Durance), Jor-El takes away Clark’s powers and gives Lois super-powers.

The lesson is clear – Lois sees, hears and feels the emotional pain that Clark endures every day as a superhero. His super-hearing allows him to hear everything and he must pick and choose who is worth saving. She also learns that Clark is her biggest weakness, and she now understand she is his.

Meanwhile, Kara (Laura Vandervoort) is trapped in a cave in an attempt to retrieve the Bow of Orion. When Oliver (Justin Hartley) shows up to retrieve it as well, the two of them work together until Kara is called away. Kara is told by Jor-El that she must leave Clark to live out his destiny. It’s her choice, of course (she can stay if she’d like), but, as he says, “it’s his time.” So now, Supergirl is cleaned off the slate.

Another reveal is that imprisoned baddie Toyman (Chris Gautheir) has been pulling strings in an attempt to buy buildings in Metropolis so he can control the water underneath them. When he owns all the property, he’ll make Metropolis pay through nose for using water. He’s created his own secret league of villains as well – and many of our heroes now have targets on the back.

And finally, we learn that since Oliver has been marked by Darkseid, when he finally retrieves the Bow, Granny Goodness shows up and destroys it and he can’t do anything about it. The Bow was supposed to go to Clark and help in with his battle against Darkseid, now that it’s destroyed and Darkseid has finally rid the world of the one thing that could potentially stop him.

All this story, which is clearly leading into next week’s series finale is backstory to the bigger revelation at episode’s end – that Lois can’t marry Clark and she tells him that. She understands the risks and the liabilities that come with this superhero job. In an incredibly well-written scene by Bryan Q. Miller & Anne Cofell Saunders, she tells Clark she would feel guilty knowing that when they were sitting on a cough eating ice cream, that he could be saving people who need help.

It’s a whopper of a scene, and yet another strong Clark/Lois moment in the many that Season 10 has afforded the two characters.

Clark also decides he’s done with Jor-El’s teachings and there’s nothing left to learn. He’s went through his trials, and now it’s time for him to step up and be all he can be (and do it in the American way). As he pulls the plug on the Fortress of Solitude, in the shadows, there’s a glimpse of the Superman suit we’re all familiar with.

Yes, I got goosebumps the moment the suit appeared.

Still, Clark has some unfinished business and next week’s series finale, we get to see the return of Michael Rosenbaum as Lex Luthor wrapping up ten years of Clark Kent’s origin story adventures on TV. It’s been a wild ride, and the show continues to impress with its attention to detail, it’s allusions to the Richard Donner directed SUPERMAN: THE MOVIE and it’s ability to make us not only believe a man can fly, but also understand why.