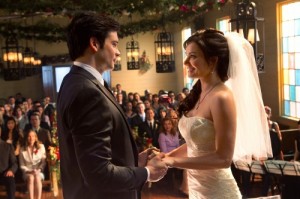 Friday the 13th proves to be unlucky (and lucky, pending on how you look at it) for SMALLVILLE fans, as the show finally ends its ten-year run on this unfortunate date with the moment we’ve all been waiting for … a wedding!

Alright, that’s not what we really want from SMALLVILLE. What we want is Clark Kent to fully embrace being a Kryptonian, don the red and blue suit and take to the skies. And yes, he finally does that.

Season 10 is all about destiny, and the two-part finale, give or take a few weird detours, was just about perfect.

The first hour was predominantly spent wrapping up tons of loose ends and doing the whole will they/won’t they get married thing between Clark (Tom Welling) and Lois (Erica Durance).

It was wise to put a lot of top heavy emotional stuff in the early part of the episode, because when the second hour gets going, it’s non-stop until the final moments.

Both Durance and Welling get some great dialogue to play off of and their vows are incredibly well written and pretty damn touching. Of course, their wedding doesn’t go off as planned. Oliver (Justin Hartley) has been infected by Darkseid and is the ring-bearer possessing a gold kryptonite ring given to him by Granny Goodness (Christine Willes). One touch of that, and Clark loses his powers for good. 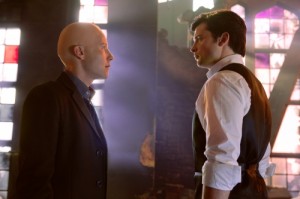 With some fighting between the two, Clark manages to save Oliver’s soul from Darkseid and with an apocalypse planet heading to destroy earth (with Darkseid right behind it), there’s a lot of work to be done.

Clark’s mom Martha (Annette O’Toole) shows up to give Clark a speech as well – about not forgetting his past as he heads toward embracing his super-future. He also is visited by the ghost of his father Jonathan (John Schneider) one more time.

It’s nice that we get all these wonderful wrap-up moments – things that the show has been layering in and preparing for throughout Season 10. There isn’t a single thing forgotten, and that’s what makes this work so well.

Going into Part 2, it’s all about setting up the return of Lex Luthor (Michael Rosenbaum). Lex is dead, but he set up a clone farm to resurrect himself and his memories, but he’s missing one thing – a heart. Alternate universe Lionel Luthor (John Glover) wants to see Lex resurrected and plans on taking the heart of Tess (Cassidy Freeman) in order to do that. She being strong willed, escapes, shooting Lionel. Clinging to life, Lionel sells his soul to Darkseid in exchange for putting his heart into Lex.

Lex and Clark have a kick-ass dialogue scene together where they talk about heroes and villains. It’s pretty awesome stuff, and it too provides much needed closure. Of course, (and this is a big SPOILER ALERT), by episode’s end, brother and sister Lex and Tess are reunited, but Lex kills her (not wanting her to become him). She has one last trick under her sleeve, she does a mind wipe on him. He remembers nothing of Clark Kent and who he really is, not to mention his entire past wiped clean.

Everyone thought Lois would get a mind-wipe by season’s end, and it was Lex – so that definitely was a great twist.

Other important bits include Oliver taking on Granny Goodness and winning, Clark stopping Darkseid and of course his final moments with Jor-El where he realizes the entire 10 years have been his trials. He’s now ready to become super – that is Superman.

In one of the most touching scenes, in the Fortress of Solitude, the ghost of Jonathan Kent hands off the Superman suit to Clark as Jor-El explains Clark wouldn’t be who he was without his earth friends and family as well.

And yes, the time has come. We get Clark donning the suit and flying. We get him stopping the apocalypse planet from destroying the earth. We get Welling in some iconic poses in the sky in the suit and we jump ahead seven years into the future. 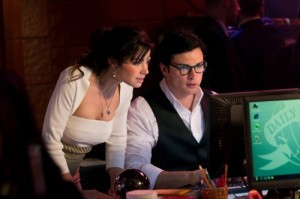 The two hours is bookended by Chloe (Allison Mack) telling the comic book story of SMALLVILLE to her young son. After the origin story is told, we get a five-minute coda that wraps everything else up. Lois has grown into the reporter we all know and love, there’s a new Jimmy Olson in town, Lex has just become president and, at first, we think Lois has been mind-wiped too.

A big surprise though – she wasn’t and now, after seven years, they’re finally, officially, getting married. Before the wedding though, Clark has to save the day again and with John Williams iconic music from 1978’s SUPERMAN – THE MOVIE playing in the foreground, Clark heads to the roof, rips off his clothes and the iconic “S” on his chest appears full frame on the TV screen signaling the beginning of a whole new era for Superman.

Now that was cool. If only these stories with Welling and Durance could continue.

As a cap to ten years of the young adventures of Superman, you couldn’t have asked for a better swan song. Yes, the first hour is a bit talky, and things felt a bit rushed in the second half, but almost everything that needed to be accomplished that was necessary. I kind of feel cheated that Tess and Clark didn’t get one final moment together, but, you can’t do everything and they have had some closure in previous episodes this season.

As a fan, I wanted to see more of Welling as Superman too. Of course that’s the point, but after ten years, it almost feels like a letdown by not getting more of him in action.

I also totally appreciate the producers not mind-wiping Lois. This is a completely different Superman universe, so I’ve been really hoping they weren’t going to cop out and take the easy road in getting Lois and Clark back to a simpler place. There was too much history and it would have been a cheap shot to all the ground work they’ve laid since the moment Durance as Lois entered the picture.

SMALLVILLE has proven that small screen superhero projects work, only if time, care and reality are integrated properly. HEROES blew it, but SMALLVILLE always knew how to strike the right balance. Sometimes it was whimsical, sometimes serious, but above all, it was a fun ride showcasing one of the best mythical comic book figures ever. The series also stayed true to the Richard Donner created universe in the first two SUPERMAN movies. That unto itself managed to keep it rooted in the movie history and allow it to adhere to certain rules, but also eke out its own place as well.

Like any series finale, there were also a few moments that will bring tears to your eyes and goosbumps on your arms. The scene where Clark, as Superman, puts his hand up to the window of the plane that Lois is in (and who he just saved), is priceless. Great emotion and totally fitting.

The biggest thing though is that the series finale was fantastic. It may not have the budget of a big movie, but it got a tons of bang for its buck. It left you pleased and excited and thrilled. It made you want more adventures of Welling as Superman. It’s a shame the show couldn’t continue on as SUPERMAN, but that would be too obvious. Doing what SMALLVILLE did successfully for ten years was the way to go. It was a brilliant way of bringing the Superman legend to a younger, non-comic-book audience and it gave the world one of the longest-running supermen ever with Welling.

It’s a bird, it’s a plane, it’s the end of SMALLVILLE and boy, what a ride it’s been.