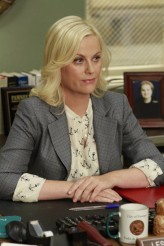 Although PARKS AND RECREATION started off okay and then developed into one of the funniest shows during its second season, it finally found some mainstream acceptance with its third season and the addition of Adam Scott and Rob Lowe to the cast. Season Three was fantastic and showed the show growing and evolving into its own.

With the Season Four premiere “I’m Leslie Knope,” the series is on target to deliver another solid year as Leslie Knope (Amy Poehler) begins to realize her political ambitions by running for City Council. Of course, it comes with a price. Her secret affair with her boss Ben Wyatt (Scott) has to end in order for her to announce her candidacy (it’s a smoking gun that could derail her career). Most of the episode deals with the dance of her not wanting to end the relationship because it’s so good. This culminates with one of the most honest, well-written and well-directed break-up scenes in sitcom history. Kudos to Scott and Poehler getting it right – and making it feel very emotional.

Since the attraction between Knope and Wyatt only grew into something last year, there wasn’t multiple seasons of a will they or won’t they scenario brewing. By getting them together late last year and breaking it off on good terms during this premiere, they still get the best of both world’s and allow their relationship some leeway to morph even further down the road.

The episode also finds Ron Swanson (the hilarious Nick Offerman) cashing in some of his vacation days to avoid contact with the infamous Tammy One (Patricia Clarkson) – his cold as ice first ex-wife.

Once again, Offerman is brilliant as Ron – his dry sense of humor really benefits the show and the rapport he’s developed with Poehler provides a great rapport between the two characters.

Not working so much this episode is the subplot about Ann (Rashida Jones) dealing with all the male employees at the government office finding out she’s a nurse and sending her photos of their “junk” to find out if they have the mumps (there’s a longer set-up to this). It’s just not that funny – and it’s ran into the ground, something this show very rarely relies on.

Although not as funny as some of last season’s episodes, “I’m Leslie Knope” is still a great start for this year’s likely season long arc of Knope rising up the political ladder. PARKS AND RECREATION works well with these mini-serialized stories because it gives the show a place to go to, while still keeping the stories contained enough that you don’t need to have seen last week’s show to know what’s going on.

With COMMUNITY and THE OFFICE also on Thursday nights with PARKS AND RECREATION, NBC just needs to figure out the fourth wheel to round out the night. 30 ROCK was also a nice pairing, but if they’re to grow the night once THE OFFICE bids farewell, they’ll need to work a lot harder at finding a satisfying (and natural fit) rather than force-feeding the dreadful WHITNEY (or last year’s OUTSOURCED) down audiences throats.