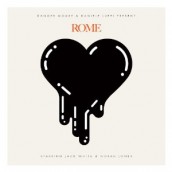 At first impressing with his replication of 60’s Hollywood sleaze jazz in the brilliantly underrated WOMAN CHASER, Danielle Luppi then swung to stop-on recreations of his motherland’s cinematic sound during the same period, an ITALIAN STORY that ranged from Morricone Spaghetti western-isms to the sensual jazz of composers like Piero Piccioni (CAMILLE 2000).

Now Luppi invites DJ Danger Mouse to venture with him to ROME, their entrancing collaboration taking Luppi’s Italo soundtrack tributes to the next, mod level. With a beautifully dreamy sound that recalls the retro-progressiveness of the group Air, Luppi and Danger Mouse’s concept album mixes catchy songs with the instrumental sounds of gun-slinging guitars, bewitching voices and sensual, psychedelic keyboards. While it once again has the nostalgic groove of today’s Euro jet set, ROME’s greatest achievement is lulling them to make their own sonic pilgrimages to hear the composers who so captivated Luppi and Danger Mouse. A score to an Italian state of mind, ROME captivates like a groovy, soft dream.