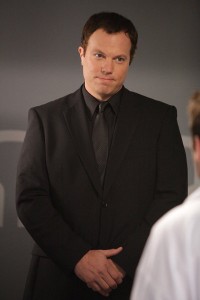 If it’s still a little unclear on why someone decided to revive the LOVE, AMERICAN STYLE format – albeit in a much less cartoonish incarnation – in 2011, the results are quite pleasant.

While one of our main characters, Annie (Becky Newton) is off on maternity leave while carrying her sister’s child, Annie’s waitress colleague Jodie (Michelle Trachtenberg) has made the big leap, giving up her own apartment and “safety net” to movie in with boyfriend Charlie (Bret Harrison). Alas, no sooner does Jodie spend one night as tenant (as opposed to guest) than she comes down with a dread case of bedbugs that soon spread to Charlie. Were they already there or did Jodie bring them? Does it matter? Will having the apartment fumigated destroy the relationship?

Trachtenberg and Harrison are both appealing and make a good onscreen couple, as well as providing some “what if …” fodder for genre fans (Trachtenberg was Dawn “the Key” Summers on BUFFY and Harrison was Devil’s son Sam on REAPER – imagine if their characters hooked up). For added fun, Adam Baldwin, in full Casey mode, makes a guest appearance as a very hardnosed hotel security man.

The second piece has recurring characters and couple Judd (Greg Grunberg) and Colleen (Constance Zimmer) wandering into a dilemma when Judd saves their friend Kyle from choking with the Heimlich maneuver. All well and good, except that Kyle’s partner Drew feels diminished by not being the one to save his lover. After a backfiring attempt to salve Drew’s ego, Kyle explains how Drew has saved his life in the larger sense and true love prevails. (Although not to the extent of showing the couple actually kissing – jeez, Broadcast Standards, any audience that is okay with the romance should be okay with a smooch.)

When Colleen winces in horror at viral videos of musical wedding proposals, doctor Matt (Matt Long) helps his friend Ricky (Donald Faison) plan one – with new lyrics to the tune of “Car Wash,” no less. However, this interlude proves to Matt that he is not really meant to be with his current girlfriend (Jaime Pressly), but is instead pining for a woman he barely knows – Annie.

While we see a very tiny pang when Annie hands the newborn over to her sister, the moment is played very lightly. On the one hand, it’s a nice change from the thundering melodrama that most shows would inflict on the scene; on the other hand, the impact is so minor that it almost might not be there. A middle ground might have served the material better.

Even so, it’s pleasing to see Annie and Matt as possibilities for one another, and the Kyle/Drew relationship is warmly drawn, despite the lack of depicted physical intimacy. Faison sings well and “Car Wash” is pretty infectious, even with its lyrics twisted to fit a proposal.

LOVE BITES – or at least its “Modern Plagues” episode – actually resembles the ends of three different romantic comedies. We get the epiphanies, the happily ever afters and the possibility of potential without the meet-cute and misunderstandings that usually precede these. It’s a bit like eating the frosting without the cake, not filling, but tasty all the same.