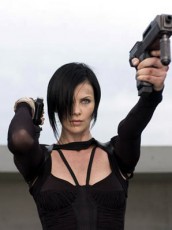 SDCC 2011 News: PROMETHEUS star Charlize Theron wishes she got into shape for the new sci-fi film

While Sigourney Weaver clearly has some big shoes to fill now that Ridley Scott is helming a loosely connected prequel to his 1979 classic ALIEN, casting Charlize Theron in the new film called PROMETHEUS surprisingly didn’t require the actress to get into shape.

Her character of Meredith Vickers is more business-like than kick-ass heroine, which got very interesting for the actress.

“I’m the Suit,” she says. “I have a very fancy office with very expensive chairs and I boss people around in a very expensive suit. In the third act, I had to do some running, which I did in Iceland. I s**t you not, I am bruised from head to toe. Maybe I should have gotten into shape.”

Although the original script featured a one-dimensional character, when Theron became interested, she began working with Lindelof in bringing some more depth to the role.

“She starts out as one thing and ends up another thing,” says Theron rather cryptically. “It’s a nice surprise. The great thing about Ridley is he shoots things with layers, so you kind of wonder. There were days I would show up and he would throw me in the corner lurking and it became a character trait – lurking and watching. And it adds to this enigma of this character and what her real agenda is.”

Continuing to be vague, as to not spoil surprises, Theron adds that her character is “not a believer or a scientist.”

“She has a cold, frigid economic mind yet there’s something about her that’s questioning,” says Theron. “I think there are these little moments you don’t necessarily see coming through here and her characterizations and we explore all of this deep s**t. And eventually in the third act I get to do some really fun stuff.”