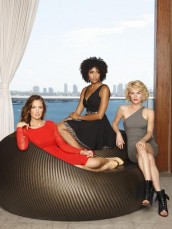 Watching ABC’s remake of CHARLIE’S ANGELS, which ran as a series from 1976 through 1981, launching the careers of Farrah Fawcett and Jaclyn Smith in the process, is to wonder who exactly the target audience is imagined to be. It would seem that the wink-wink sex appeal (called “jiggle” at the time) and the almost Saturday-morning earnestness of the hot female crime-fighting trio would be too retro to work, but new ANGELS show runners (and opening episode writers) Alfred Gough & Miles Millar propelled similar earnestness into ten years’ worth of SMALLVILLE episodes, so maybe this will catch on.

In any event, for anybody who missed not only the original series and two campy film versions but also all discussion of same, CHARLIE’S ANGELS concerns a detective agency run by the oft-heard but never seen Charlie (voiced here by Victor Garber), who has gathered together three ostensibly talented and smart young women to work for him. The twist in the new edition is that the Angels are all being given second chances. Kate Prince (Annie Ilonzeh) is a former dirty cop, Abigail Sampson is a reformed thief and Gloria Morales (Nadine Velasquez) is ex-U.S. military. When Gloria is killed, the Angels find themselves teamed with Gloria’s old pal, street racer Eve French (Minka Kelly). Eve is suspicious of these kickass glamorpusses and their invisible boss, but when it turns out that teaming up leads to catching Gloria’s murderers, Eve decides she’s on to a good thing.

Granted, the whole cast – including Ramon Rodriguez as the Angels’ male assistant Bosley – is easy on the eyes and there’s nothing really wrong with the show. Certainly, one can think of other series currently or recently on the air that feel just as fluffy, despite the nastiness of the bad guys. On the other hand, seeing great-looking women engaged in physical combat doesn’t pack quite the novelty it did back in the ‘70s; it may not be quite as prevalent as having very fit men fighting physically for justice, truth and all that good stuff, but it’s relatively easy to find with a lot more story (if that’s what one wants) and/or skin (if that’s desired) than is on view here.

There’s a strange consistency here, in that these Angels are roughly as faux-hip in 2011 culture as the original Angels were thirty-five years ago. The characters are meant to be cool, iconic figures, but they come from a sensibility so completely synthetic that they come off more like some kind of meta-commentary on the genre than an actual offering within the genre. The show is watchable in the same way that reruns of IT TAKES A THIEF are watchable, smooth and glib and retro without generating any real excitement or sense of camaraderie. But again, don’t count either the premise or producers Gough & Millar out. Certainly good shows have sprung from even less promising starts.