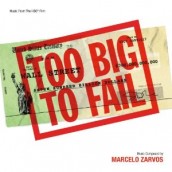 CD Review: TOO BIG TO FAIL

After doing consistently interesting, small-scale scores for such HBO movies as TAKING CHANCE and YOU DON’T KNOW JACK, Marcelo Zarvos literally takes on his biggest subject for the financial apocalypse that nearly took down the U.S.A.- that is if you believe the bankers who got a zillion-dollar government rescue from the home loan meltdown they caused. But there’s no doubting the urgency that Zarvos brings to the crunching numbers that the freaked financial kingpins are throwing about, a driving, rhythmic mix that makes you picture Jason Bourne leaping over the Wall Street bull in a mad dash to save the country.

Zarvos has created a smart action score for a crisis of talk instead of explosions, its cliffhangers occurring in board meetings. It’s a pulsing, and very concerned approach that gives considerable momentum to BIG’s relentlessly ticking clock to Armageddon. And if you couldn’t give a fig about executives with bigger bonuses than most countries’ annual incomes, Zarvos’ concerned, and downright suicidal strings bring a human dimension, and even sympathy to the crisis’ players that makes FAIL hit us with impactful relevance. You can only imagine what Zarvos would’ve come up with for Obama’s debt ceiling battles after this suspenseful listen.

Click on link: To buy the Too Big To Fail soundtrack