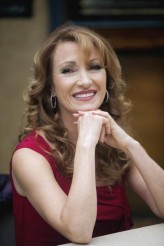 Back to business in a standard episode that still satisfies 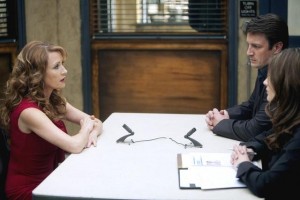 After nearly dying in each other’s arms twice in the CASTLE two-parter where we last left author Richard Castle (Nathan Fillion) and homicide cop Kate Beckett (Stana Katic), this episode is back to business as usual, but in the good kind of way.

It’s got the charm, some of the silliness and the warmth that make this whodunit so engaging.

In “One Life to Lose,” the head writer of the infamous soap opera TEMPTATION ISLAND is found dead on the set with an ax in her back and the suspects include her estranged husband Vince (Cameron Mathison), the series diva that that writer wanted to write out Mandy Bronson (Rebecca Budig) and the writer’s long-lost mother (Jane Seymour).

We’ve got the usual four turns in the investigation room, with suspects denying that they did anything, but what really makes the episode is Jane Seymour having way too much fun as the con woman who impersonated the dead woman’s birth mother. If you mostly remember Seymour in DR. QUINN: MEDICINE WOMAN, her work in this episode may be a bit startling. Seymour certainly proves she has some real chops.

The one downside is that Josh (played by Victor Webster who does not make an actual appearance in this episode), Beckett’s boyfriend, is still around. I’m sorry. It’s time to kill him off and be done with it. Oh, you don’t think they’re going to kill Josh off? It’s the traditional way to do it when you’ve got your heroine matched up with the wrong guy and you’ve got to clear the path for her real love interest. You know, like Castle.

But that bit only happens way at the end, after Beckett finally ‘fesses up to Castle why she is a such a fan of TEMPTATION ISLAND – and it is one of those cool moments that make the show so much fun to watch. The only thing better is watching Castle’s mom Martha cosying up to Lance (Corbin Bernsen), one of the actors on the soap. Naturally, Martha, an established actress, herself, did some time on the show.

Again, it all adds up to something fun and sweet and special. And we still need to get rid of Josh.