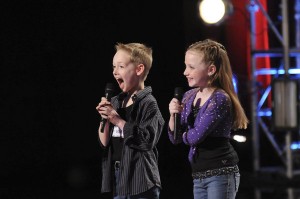 Network: NBC, airs whenever the network wants it to air
Original Telecast: June 28, 2011

The question keeps coming up over and over again as I sit and watch hundreds of people make fools of themselves on AMERICA’S GOT TALENT. Why? Why? Why? Don’t these people have loved ones advising them not to go on television and embarrass themselves? I don’t get it. Yet, they keep on coming.

Many like Rak & Tak, a married couple, both doctors apparently, aspire to be singers. There is one very, very big, humongous, ginormous problem with their dream – they can’t hold a tune!

Still when the lulls and dulls slow the show down you have to hand it to host Nick Cannon who has no problem jumping onto the stage and sharing in the humiliation, only with him it’s funny. Bravo Nick! That’s why he gets paid the big bucks. Still, without Cannon saving some face for these people all that’s left is mostly inadequacy with some frills.

Other performances for the “New York Auditions 2” (pre-empted from last week) are The Smage Brothers Riding Show, a motorcycle stunt team who did prove to be entertaining and dangerous. Barricades were even put up to protect the audiences, still, nothing was put up to protect judges Piers Morgan, Sharon Osbourne and Howie Mandel. Mandel, neurotic as always, moved over to behind the audience barrier to watch while the team performed, wowing the audience and the judges and getting a trip to Vegas in doing so.

The pink-wigged Shirley Temple looking dance team The Sally Gould Dancers also impressed all and were granted a trip to Vegas as was Dylan Andre, a beautifully-voiced singer and guitar player. I actually wished they would have showed him singing his whole song, instead they cut his clip down to about ten seconds.

Why? Well, to make room for the 75-year-old muscle man? C’mon, really? Muscles got buzzed off and so did Sandy Kane the Naked (almost) Cowgirl who sang a diddy entitled “I love Nick” (Cannon that is). Maya Sinstress vs. Zombie Apocalypse (don’t ask) didn’t fare well either. Satori Circus, a man dressed like a baby acting like a baby couldn’t get the judges excited, surprisingly, either.

Still Leonid the Magnificent, who tried out for his third time finally, to Morgan’s dismay, made it through thanks to Osbourne and Mandel. His quick-change act intrigued, his singing, not so much. Sweet voiced Rachel Zanstein with her soulful, yet restrained, talent barely made it through. Narcisister, a weird act just impossible to explain and Sam B (no i in Sam – inside joke) made the judges giddy with delight.

Sam B was definitely something you don’t see every day. His dancing was both hilarious and unique, definitely not the same old same old, for sure! He gave it his all and he was rewarded…onto Vegas! Stay tuned!