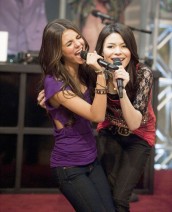 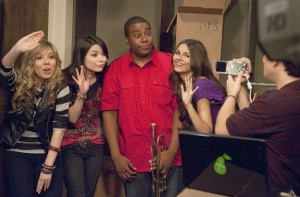 The sporadic scheduling of iCARLY on Nickelodeon has certainly become somewhat frustrating over the last year. With only one new episode, on average, every month and a half or so, it’s very strange how extreme the network rations this show.

Granted, the repeats do wonders for them, but when you have a show in its fourth season and only ten of what will probably be an 18-episode season (if you base it on the number of episodes from Season 3), then it’s very annoying indeed.

Nonetheless, it doesn’t stop the show from making every new show a major event and “iParty with Victorious” is a ninety minute movie (or the 10th episode of the season, whichever you want to look at it) which crosses over the cast of iCARLY but also VICTORIOUS – two shows created by Dan Schneider.

The set-up is simple: Carly (Miranda Coscrove) discovers her boyfriend of three months (who spends half the time in Seattle and half in Los Angeles) is actually cheating on him with Tori (Victoria Justice) from the VICTORIOUS series. Sam (Jennette McCurdy) finds out there’s a party where her boyfriend and Tori are going to be at in Los Angeles where they can verify if he is indeed cheating. Hence, Carly’s brother Spencer (Jerry Trainor) and their friends Freddy (Nathan Kress) and Gibby (Noah Munck) pile into a van and plan to crash it to find out the truth.

Since everyone will know who they are, they use special effects make-up to disguise them so they can crash the party unnoticed.

Guest star Kenan Thompson (who used to be a Nickelodeon star before signing up for SATURDAY NIGHT LIVE) makes an appearance as the owner of the house where the party is taking place (resulting in ALL THAT and SNL references being thrown around).

At ninety minutes, there’s a ton of padding going on in this episode. Equal time is spread between both the iCARLY cast and the VICTORIOUS cast – so you get a nice feel for each of the show’s eccentric set of characters.

Yet, the mechanism for verifying Carly’s boyfriend is cheating is a bit of a stretch – and to pad things even further, the episode concludes with a mash-up performance of the theme songs between the two shows.

Still, the one thing that iCARLY continues to prove four seasons in is how good a sitcom it actually is. It’s silly, strange and often-times all over the place, but the cast of characters are so good and engaging, it’s no wonder the show has been such a success for Nick.

Additionally, Schneider is all about just having fun, so there are random things that pop up in episodes that are silly and have no real pay-off, but just add to the weirdness of the show. In this episode, there’s someone dressed in a panda suit who crashes the party and hits people in the butt with a tennis racket. It may not be on the level of Monty Python-inspired silliness, but it still allows iCARLY to retain its coolness factor as one of the best tween shows on cable TV.

The only other bit of housekeeping this episode has to do is to get over the hurdle that Victoria Justice previous appeared in an iCarly episode as boxer Shelby Marks. With her playing a different character, the question was how they were going to address it, and of course, thankfully, Schneider does a nice wink-wink to the audience early on so that burning question doesn’t burn in a hole in your brain while watching the show.

“iParty with Victorious” is not the best of what iCARLY does, but it’s not terrible either. When you have such a crackerjack cast, they can basically do very little for ninety-minute and still make things quite entertaining (and that’s clearly what’s happening here). The show is funny, silly, smart and occasionally dumb, but above all it’s entertaining. And if you’ve ever tried to suffer through a Disney Channel tween show, having something as original, different and ambitious as iCARLY on the air is a welcome change of pace.

Click on Link: Exclusive photos from the iParty with Victorious cast and crew premiere