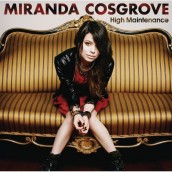 A short E.P. of radio-friendly pop with a great duet with Weezer’s Rivers Cuomo

Out of all the tween singing princesses spawned from Disney Channel/Nickelodeon shows, Miranda Cosgrove has the most potential to break out and have a pretty sturdy musical career long after her core audience has moved on.

Last year’s SPARKS FLY was an excellent debut CD from the iCARLY star that mixed 1980s pop and techno with a modern sensibility. There were a bunch of great tunes on that disc including “Sparks Fly,” “Disgusting” and “Shakespeare” and now she’s looking to take things to the next level with her five-song E.P. HIGH MAINTENANCE.

Avril Lavigne co-penned the lead-off track “Dancing Crazy” which is as catchy and as poppy as it comes. Yes, there’s a little too much auto-tune going on, but Cosgrove’s bubbly persona escapes pretty much unscathed.

The stand-out track here is “High Maintenance” which was written by Weezer frontman Rivers Cuomo who also duets with Cosgrove on the tune. Fun and silly, it’s a really strong track that’s playful, but also shows that Cosgrove herself has good taste when it comes to music in general. The key to a successful musical career is to have songs that transcend the years they were produced in and that don’t come off icky sweet and throwaway like many tween stars fall prey to.

Granted, I do have issues that Cosgrove using the word “asses”  in “High Maintenance” when a strong core of her audience is still of a young age (and parents may not let their kids listen to this CD for that reason alone). Then again, she’s duetting with Cuomo and it’s a perfect fit that doesn’t feel contrived or forced (I dare Miley Cyrus to pull off a duet with Cuomo).

The good taste, when it comes to music also extends to “Face of Love” which begins with a nice little alternative  bass groove that wouldn’t feel out-of-place on an album by The Xx. It’s a smooth track too, and further shows Cosgrove’s musical growth.

Meanwhile “Kiss You Up” is just a flat-out great midtempo ballad. Excellent stuff.

The only song which feels like filler (and more like a SPARKS FLY leftover) is “Sayonara.” It’s a little too silly and obvious for an otherwise solid E.P. and it has the awful line “Like A Ninja Out of the Dark/I’ll Steal Your Heart”. Ack!

The disc also comes with a bonus DVD that features a documentary on the making of the album (but why no music video?). The DVD is what adds the extra price to the CD, which frankly over-prices a perfectly good release and this solid introduction to Cosgrove’s material.

It will be interesting to see how Cosgrove fares in the music business. Her music has chops, it’s catchy, memorable and could feel right at home on Radio Disney as well as Pop 40. She knows what works for her – and clearly what kind of music she likes which already gives her a dangerous weapon that her peers don’t have – good taste. Could she be the next Kelly Clarkson? Well, actually, yes!