The X List: MACHETE is one of the Highlights to DVD and Blu-ray Titles This Week 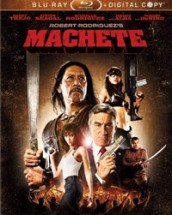 The X List: MACHETE is one of the Highlights to DVD and Blu-ray Titles This Week

Happy New Year! But, unfortunately, for DVDs and Blu-ray titles, this time of year it’s slim pickens. However, each week something is always interesting. Here’s what I think you might enjoy.

MACHETE – They called him Machette … what began as a simple one-shot trailer as part of the retro look to the GRINDHOUSE double feature from Quentin Tarintino and Robert Rodriguez gets its time to shine. Rodriguez always wanted to make the film after doing the trailer and gathering some pretty heavy hitters it turns out to be one hell of a fun ride – well, if you enjoy a ton of blood, gore, body parts flying, harsh language, some great nudity and much more. Obviously, with this type of movie, expectations are low and if you just go in thinking its gonna be mindless fun, you’ll be rewarded. On Blu-ray you get a digital copy, deleted scenes and a ton of featurettes. 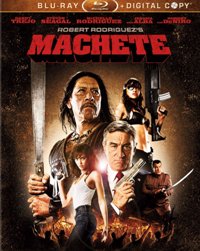 EL MARIACHI TRILOGY – How cool is this? Not only do you get all three of Robert Rodriguez’s tale of bad ass Mexicans kicking all sorts of major ass but they are all remastered for high def and come packaged together for a freaking steal. You get EL MARIACHI, DESPERADO and ONCE UPON A TIME IN MEXICO for $19.95. Damn worth the price of admission.

DINNER FOR SCHMUCKS – Put Steve Carell, Paul Rudd, Zach Galifianakis and more in a room and what do you get … some pretty funny stuff but it could have been much better. Basically, a corporate executive has a monthly event where his employees bring idiots to dinner. Rudd brings Carell and the zaniness begins.

THE LAST EXORCISM – After years of performing fake exorcisms and taking money from innocent people, a dirty reverend travels to a back-water town in Louisiana to film what would be his last exorcism. But when he gets there, it turns out to be anything but a fake. While it has some moments of being spooky, it falters toward the end. Worth a rental, however.

BITTER FEAST – A foodie horror! Who would  have thought. What begins as a typical film about rivals in the food industry spirals into a crazy kidnapping and torture horror film after a well-known chef has his TVshow cancelled and gets canned from his fabulous restaurant. The fun thing here is that you actually learn some good cooking tips along the way. It is a nice twist on the genre while at the same time providing some pretty good tongue-in-cheek nods to food programs and the whole culture of organic farming and cooking. Check it out, you’ll like it regardless if you dislike horror (it isn’t that gory). 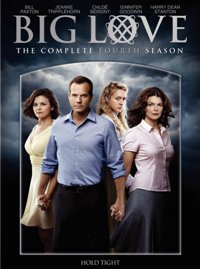 BIG LOVE – THE COMPLETE FOURTH SEASON – HBO’s drama about a family where the husband has three wives comes home for the penultimate time. The last season is airing on HBO starting this month and if you missed anything, here’s your chance to catch up before it goes away.

THE SARAH JANE ADVENTURES – THE COMPLETE THIRD SEASON – Personally, I couldn’t finish the first season of this DOCTOR WHO spin-off because it had a load of annoying kids and stupid storylines. But someone out there is watching since this is the third season. Get it if you need a DOCTOR WHO fix, but nothing more than that.