Home » The Dork Side takes on movie trailers including THE AMAZING SPIDER-MAN, THE SMURFS and more 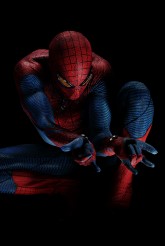 The Dork Side takes on movie trailers including THE AMAZING SPIDER-MAN, THE SMURFS and more

Sometimes the best thing about going to the movies is seeing the movie trailers. Other times … not so much.

Here are five movie previews that I watched so you don’t have to.

From the director of BIG MOMMA’S HOUSE and SCOOBY-DOO is another movie that will make you make you wish you were never born.

This movie looks so smurfin’ bad. I would rather eat a smurfin’ gun than see it.

OK, I’m not going to lie to you, dear readers. I am going to see this movie even though I already saw it in 2002 when it starred Tobey Maguire. I am a nerd, and it is my duty. However, this is the last time, SPIDER-MAN. You hear me? After this one, I am not paying to see any more versions of the the same story. Got it! I’m only doing this because I’m a dork and because of the brain damage I suffered from watching SPIDER-MAN 3.

I had a nightmare that a friend and I switched bodies and she went to see this movie in my body. When I finally got my body back, I had to kill myself.

I have this rule: I don’t see movies that star cute animals. These movies always make me cry and then I feel stupid hate myself.

I have no doubt that the story of a dolphin that loses its tail and gets fitted with a robotic one is [swallows hard] a very moving story [brushes away tears] about triumphing over [sobs] … I can’t. I just can’t.

First of all, I don’t think it’s funny when guys dress in drag in the movies and they don’t really try to look like women. TOOTSIE and SOME LIKE IT HOT are funnier because the actors really tried to look like women. Movies such as WHITE CHICKS or JUWANNA MANN are unfunny because the actors smear lipstick on their face and “act” like women. Well, that’s not the only reason those movies are unfunny, but I don’t have time to get into that right now.

Sadly, I actually really like Adam Sandler, but for every one HAPPY GILMORE he makes 10 MR. DEEDS.

I think George C. Scott sumsup  my feelings about watching this preview:

Click on link: For more THE DORK SIDE columns