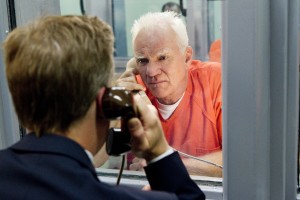 On TNT’s FRANKLIN & BASH, a new legal dramedy (airing its season finale tonight at 9 PM), the two title characters, played by Breckin Meyer and Mark-Paul Gosselaar, are free-wheeling lawyers who are recruited into an upscale legal firm by one of its senior partners, Stanton Enfeld. Enfeld, a wily, eccentric fellow, is played by legendary British actor Malcolm McDowell (A CLOCKWORK ORANGE, TIME AFTER TIME, STAR TREK: GENERATIONS, etc., etc., etc.).

McDowell is as gracious as he is frequently employed. When a reporter steps up to talk with him about his new show, he includes FRANKLIN & BASH producer/director Jason Ensler in the interview, making it a two-fer.

MALCOLM McDOWELL: Jason is a producer of the show and one of the finest directors I’ve worked with – in the last week. We don’t want to give him too much of a big head.

JASON ENSLER: I love this man.

McDOWELL: He’s a real director. He really tells us what’s what.

AX: On the H.G. Wells in TIME AFTER TIME/Alex A CLOCKWORK ORANGE scale, where does Stanton Enfeld as a character land in terms of niceness/menace?

McDOWELL: Well, this is a wonderful character. Make no mistake about it – this is as wonderful as a character as I’ve ever played. It stands with any of the great characters I’ve done. But because it’s a television show, it may not seem as important, but it is to me. This is a truly wonderful character and one that has enormous potential for growth and the comedy aspect, I absolutely love. FRANKLIN & BASH – I love this series as much as any movie I’ve ever done. He’s not scary at all. He’s far from it. He’s the other side of that coin. He’s a benevolent, wonderful Renaissance man. H.G. Wells was a good guy, too – this is in that vein. He’s a wonderful character.

AX: Is FRANKLIN & BASH a show where they alternate between you and a second director every other week?

ENSLER: Something like that. I don’t know if it’s as regimented as that, but yeah.

McDOWELL: He’s pretty much done half of the shows. It would be impossible for him to do every single one, because you have to prep and stuff, but Jason is really our resident director/producer, we like to think part of our team. [It] is very important to have continuity with a director, because it’s always difficult for the other directors, I have to say, coming in, because you go, “Well, Jason wouldn’t do it like that.” It’s a bit like that. But we try not to be judgmental.

AX: Is it difficult for you as an actor to go back and forth between directors on a show when you’re playing the same character throughout?

McDOWELL: No, it’s nice, actually, when you get somebody who totally gets it and comes in and goes, “Oh, look, this is a great Enfeld thing to do. Do this.” But also, one is a professional actor. It’s my job to work with whoever is thrown at you. Sometimes you get schizophrenic nutters. Not on television in America, but you go to the Netherlands or the Eastern European countries – oh, my God, you don’t know what you’re going to get.

AX: When you’re working with actors on a TV show, what sort of direction do you give them?

ENSLER: A lot of my job is to make sure tonally we’re consistently in the right place, and that affects shaping of the performances in ways that service the characters and the show, so it’s more than just moving them around. It’s servicing the narrative.

McDOWELL: I have to say – and Jason is here, so I’ll say it in front of him, but he knows it – there are directors who you trust, who are impeccable in their judgment. And I don’t care how experienced you are, every real actor that I know loves to be directed, because it only improves what you’re doing, so if you’ve got the third eye watching and shepherding, that’s a real wonderful gift to have, and he does that a lot.

ENSLER: A lot of what I do is just try to create an environment where they can be free to find things they never expected to find, so when we’re off the page, we’re into the life of it.

AX: Do either of you have an example of that from FRANKLIN & BASH?

McDOWELL: He said to me, “Oh, when you come in, just hold this box.” “What’s in the box?” “Oh, it doesn’t matter. It’s sort of an Enfeld thing. Just bring it in as if there’s something precious in it.” And so it just gives another element to the scene, because you are wondering, as the audience, what’s in the box? Of course, you never find out – he just wanders off.

ENSLER: But then this box became like this business – what’s in the box?

McDOWELL: It’s lovely. It’s another element to a scene, which is otherwise just a scene.

AX: The one-man show you did about your work with Lindsay Anderson [IF, O LUCKY MAN,BRITTANIA HOSPITAL] has been filmed and is now being made available to the general public …

McDOWELL: Oh, yes, [it is] out, I’m glad to say, on DVD and Blu-ray. It’s called NEVER APOLOGIZE. Warners put it out with the fortieth anniversary CLOCKWORK ORANGE DVD.

ENSLER: FRANKLIN & BASH is on. That’s what I have to say. Watch it, it’s terrific.