TCA 2011 News: New CHARLIE’S ANGELS reboot for ABC will be “more grounded” and the “love child” of Jack Bauer and Carrie Bradshaw 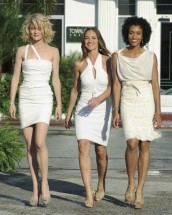 TCA 2011 News: New CHARLIE’S ANGELS reboot for ABC will be “more grounded” and the “love child” of Jack Bauer and Carrie Bradshaw

At today’s Television Critics Association session for the new ABC reboot of CHARLIE’S ANGELS, executive producers Al Gough and Myles Millar spoke about what makes this version different from the 1970s series and the successful feature films.

“We wanted to make these women feel real,” says Gough. “When you launch a TV series, the success comes in following characters that make you want to come back to each week.”

Having rebooted the Superman franchise with SMALLVILLE, Gough and Myles are also no strangers to fan expectations and the key ingredients in rebooting a franchise for a whole new generation.

“We know a show like this has a big target on its back,” says Gough. “It’s something that if you do it right like HAWAII FIVE-O, it can work. For us, it was finding this emotional theme and a clear vision for what we wanted to do. It’s a show about redemption and second chances. All these ladies have a past and each week they solve cases that are about second chances.”

Millar adds that they also wanted their Angels to feel more fleshed out – in a character sense.

“We wanted our Angels to feel emotionally resonant and less cartoony,” says Millar. “We looked back at the history and what worked for the TV series and film series and brought enough freshness and originality to it. We’ve taken the material and DNA of a detective show, changed the location to Miami and made it more International. We wanted out Angels to feel more dimensional to a modern audience, particularly those on ABC. That was very important to us.”

Gough goes on to say that actress Rachael Taylor who plays Angel Abby Sampson on the series summed up the series in a nutshell with a recent statement.

“Rachel had the best description of ‘If Jack Bauer and Carrie Bradshaw had a love child it would be CHARLIE’S ANGELS,” says Gough.