TCA 2011 News: PAN AM producer/director talk about how the 1960s set series is nothing like MAD MEN 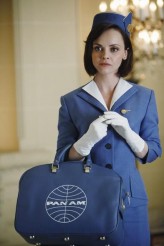 TCA 2011 News: PAN AM producer/director talk about how the 1960s set series is nothing like MAD MEN

With NBC debuting the 1960s set THE PLAYBOY CLUB this fall and ABC airing the 1960s set PAN AM (a serialized drama about the legendary international airline), questions have arisen whether or not these series would not have made it on the air without the success of the AMC period drama MAD MEN.

While at today’s Television Critics Association session for the new ABC series PAN AM, executive producer  and director Thomas Schlamme says a good show has nothing to do with its setting.

“Television is execution, and not the time period it takes place in,” says Schlamme. “All I can really say is PAN AM has nothing to do with MAD MEN. We’re all fans of MAD MEN, but one doesn’t have to do with the other.”