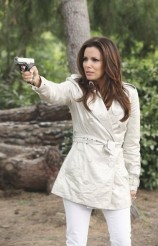 With ABC just announcing that DESPERATE HOUSEWIVES will be ending after its forthcoming Eighth and final season, creator and executive producer Marc Cherry spoke today at the Television Critics Association today about how that decision came about.

“I think the only thing harder in creating a hit show is when to end it – especially when you have one of the most amazing casts in the history of television,” says Cherry. “Because I have been working in TV for 23 years, I’m also very aware of people overstaying their welcome [especially] shows that have gone on too long, drifted away into nothing and unceremoniously are booted off. I didn’t want that with DESPERATE HOUSEWIVES. I wanted to go out when the network still saw us as a viable show and we were still doing well in ratings. I wanted to go out in the classiest way possible.”

As for spin-off possibilities, Cherry says he wants to focus his time on new projects that challenge him as a writer, but couldn’t help but reveal a conversation he recently had with HOUSEWIVES actress Eva Longoria about the show ending and still wanting to work with her.

“In my phone conversation with Eva, I was like, ‘I’m going to put you in a van and have you solve mysteries,’” he says with a grin.

That said, Cherry concluded his appearance by talking about how difficult it is to write DESPERATE HOUSEWIVES and he didn’t do himself any favors in creating such a complex series.

“My next show will be two guys in a prison cell – something way easier than DESPERATE HOUSEWIVES,” Cherry says with a laugh.