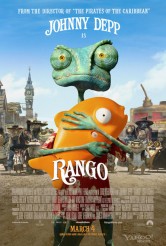 Super Bowl Commercial Review: RANGO trailer (and watch it too!)

Release Date: March 4, 2011
Stars: The voice of Johnny Depp
What Is it? An animated feature from director Gore Verbinski about a house lizard stranded in an old west town where he must navigate ruthless gangs and other animated cowboy ruffians.
Want To See Factor: Animated films are tricky to do right, but this one looks like a hoot – playing to both kids and adults with some great humor and impressive animation. The trailer shows off the film’s sense of humor in the first part as a slow build and then kicks it up a notch from there. Excellent stuff.
Super Bowl Points: This trailer knows exactly how to handle the Super Bowl crowd as it pronounces, “Explosions! More Explosions! Other Stuff!”
Grade: A-