Home » Super Bowl Commercial Review: PIRATES OF THE CARIBBEAN: ON STRANGER TIDES trailer (and watch it too!) 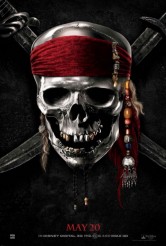 PIRATES OF THE CARIBBEAN: ON STRANGER TIDES

Release Date: May 20, 2011
Stars: Johnny Depp, Penelope Cruz
What Is it? The fourth sequel in the PIRATES saga, this time solely focused on Depp’s Jack Sparrow.
Want To See Factor: Anyone who’s seen the previous released trailer, has seen this one, except crammed into a tighter spot. Does it make you want to see it? I guess if you’re a fan of the first three movies (I only liked the first one). However, it’s clearly more of the same.
Super Bowl Points: Swashbuckling action, mermaids and zombies and an explosion or two.
Grade: C-