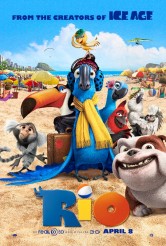 RIO
Release Date: April 15, 2011
Stars: Voices weren’t promoted on the commercial
What Is it? An animated movie set in Rio about a bird who needs to find his rhythm. It’s “From the creators of ICE AGE.”
Want To See Factor: The trailer is not very funny even though the visuals look somewhat impressive. They should have went the RANGO route and tried to go for the quirkiness of the project, instead of the silly. “From the creators of ICE AGE” can only get you so far and it serves no purpose here except to remind people that it “might” be good.
Super Bowl Points: It looks like a kid’s film, though a bird being sling-shotted into a girl’s butt (wearing a yellow bikini) is obviously geared to this crowd. But, come on folks, this is an animated butt. JUST GO WITH IT’s bikini clad hottie trumps this one any day.
Grade: D+