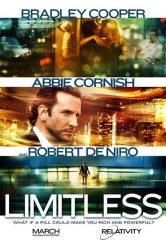 Release Date: March 18, 2011
Stars: Bradley Cooper, Robert De Niro, Abbie Cornish
What Is it? A new sci-fi thriller about a drug that allows you to tap into all of the potential of your brain – and apparently makes you smarter than Robert De Niro. But hey, you don’t need a pill to make you smart enough to avoid starring in LITTLE FOCKERS.
Want To See Factor: It looks interesting, but more in watching it at home sort of way.
Super Bowl Points: It showcases money and power – all good things for the testosterone-fueled crowd, but if there is any danger or extreme sci-fi elements in this film, they were well hidden in this brief spot.
Grade: C-