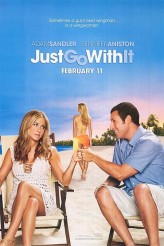 With Super Bowl Sunday here, ASSIGNMENT X has decided to review the movie trailer commercials in between the game to see how well the studios are using the mega-dollars they’re spending to draw people into theaters.

JUST GO WITH IT

Release Date:  February 11, 2011
Stars: Adam Sandler, Jennifer Aniston,  sexy busty blonde
What Is It: The Super Bowl commercials kick off into high gear with a jiggle show to promote the new Adam Sandler comedy. It begins a hot blonde in a yellow bikini coming out of the water and walking toward the camera. The commercial is so aware of how hot the girl is – it becomes an instant replay.
Want To See Factor: Frankly, the concept behind Sandler’s new comedy has been very confusing in previous campaigns, so this 11th hour promotion of the comedy seems well-timed especially when the announcer says “tell your girlfriend it’s a romantic comedy” as they flash the image of the blonde on the screen again. Nothing else funny in the commercial, so, this one is going to have to rely on Sandler’s core audience because a sexy pair of bouncing fun bags are not enough to make you drop $30 bucks at a theater.
Super Bowl Points: T&A is a plus, but not much else.
Grade: C