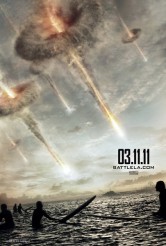 Release Date:  March 11, 2011
Stars:  According to the trailer, there’s no stars, just a bunch of angry robots and threatening spaceships attacking humans in Los Angeles.What Is It: Los Angeles is under attack by alien ships and some robots.
Want To See Factor: Didn’t we just see this in SKYLINE? WAR OF THE WORLDS? DISTRICT 9. B-o-r-i-n-g! This does nothing to make me want to go to the theater.
Super Bowl Points:  It’s not in 3D – which, frankly, is a major plus.
Grade: C-