Home » Profile: INSIDIOUS actress Lin Shaye is the psychic next door in the hit new movie 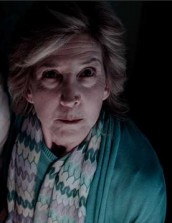 Profile: INSIDIOUS actress Lin Shaye is the psychic next door in the hit new movie 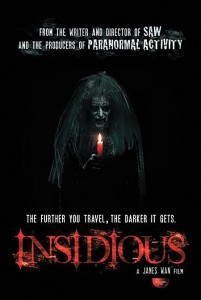 Lin Shaye has played a lot of colorful characters over the years. Her roles have ranged from the wildly comedic to deadly serious. Her latest role in the new hit horror thriller INSIDIOUS, is a more natural and down to earth performance. In the film Shaye plays a sensitive or psychic, if you will, that has been called in to help a family that is being haunted and to help save a child’s life.

ASSIGNMENT X got the chance to speak with Shaye at the Magic Castle in Los Angeles last week, the perfect setting for this kind of film’s press tour, and found out about her own experiences in the paranormal, her preparations for her role, and about convincing herself and an audience that she sees dead people.

“It was actually very simple,” explains Shaye. “The way it’s cut in the film is that Patrick [Wilson] has been the big doubting Thomas and he finally decides to have me come in and see what I can do. One of the things I talked about with [direcotr] James [Wan] was that it was not about the hocus pocus or the fortune telling, sitting and holding hands – it was none of those things. This was just an ordinary woman who is a receiver and a sensitive person and is tuned in and goes to these other worlds because she allows it and is tuned in. I gotta tell ya I think we all have that gift on some level and it depends on how you want to nurture it and open it up and all kinds of things. So, she’s just an ordinary person and the séance is really about getting ready to take a journey. She knows where they are going. It’s about providing comfort for the two of them, letting them know what they can and can’t do and off they go.”

On her own personal paranormal encounters…

“I’ve had some experiences in real life,” admits Shaye. “I think I’m a good receiver. I am really into animals and into spirituality of some sort. I don’t really practice anything, except other than trying to be quiet. When I’m on the treadmill I close my eyes and I see if anything comes up. It’s a valid thing. If you think about it, you get your blood flowing to your brain and you are relaxing and breathing and taking in lots of oxygen. I think that’s what mediation is all about is quieting yourself and allowing whatever might be out there to speak to you. The experiences I’ve had were really scary and I do mean really scary and I won’t go into that. It was so scary that fear became my enemy, because I think that’s a lot of what it’s about too. When you’re full of fear everything closes down and you feel like you’ll never get out. It’s kind of like a bad acid trip. [Laughs] I mean I wouldn’t know. At least not lately! To really answer the question, I’ve had a couple of experiences with psychic friends. One was about my animals because I ask questions, but I don’t know if I’m ready to believe what they tell me about that.” 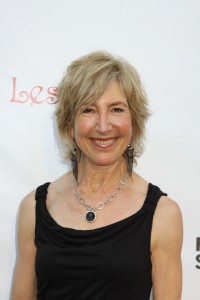 On the unique equipment she uses on camera in the film….

“The equipment they provided me with sort of did its own thing,” explains Shaye. “It was very claustrophobic. Once they put it on me I had never had it on before and it didn’t fit. I had something poking me in the eye, and in my windpipe, and another thing up my nose and it was pressed against my face. I couldn’t breathe and I thought to myself “I can do this … no I can’t do this!’ So the wonderful guys who built this piece of equipment came and took it and fiddled with it. It was still with the nose and the eye and they took it a second time, and the production was setting lights so they really had no time to fix it. Finally I put it on and thought I was good. Even within that, the eyepieces fog up and you’re not getting a lot of oxygen – you’re breathing in a lot of carbon monoxide. It’s hot and tight and there we were! [Laughs] Of course we then tried to manifest what I was hearing that Specs was writing, and it could almost have been comical, but it somehow was not. It was really creepy and scary, and I think it’s because the set up was so simple.”

“We shot that scene on the first day,” smiles Shaye. “I was petrified, because I thought I might not be able to pull it off. You know you have to be looking up and there was nothing there and you have to pretend. [Laughs] It’s back to old acting pretending. As an actress I latch onto to what ever physical things I have on hand – what’s real ‘real’. Again if you are relaxed things start to happen, and you can’t push too much. It was kind of odd because there was a momentum with the fan, and the sound of the fan which they intensify on the film itself, which is so great, this whoomping sound. I knew what I was supposed to be seeing and I did try to get some imagery in my own head, some little secrets to make me scared and what started happening is that I started mumbling what I was seeing. That wasn’t scripted. At first you kind of hear what I’m saying and I wasn’t sure what they were going to do with the track and it’s interesting because you don’t really hear what I’m saying, Specs is just drawing like crazy. Then you hear a word, then another word, then a sentence. Now were in, and I was very pleased that it had the response it did and that it photographed like I was hoping it would.” 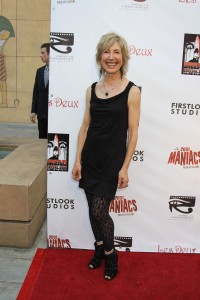 On how important it was to make her character a “grounded” person and not just an eccentric psychic….

“James and I talked, because I’ve done a lot of what other people call extreme characters, and I just call them people,” says Shaye. “He said that Elise was the psychic and I think it was after I had read the script – he said that they didn’t want her to be a corny fortune teller. I told him I didn’t really see her like that anyways. If he’d asked me to do that I probably would have told him that I didn’t see her that way. It’s a family drama turned on its head, and Elise has to be a part of that family in some ways. That is what I thought about, and the actor’s secrets I talked to Specs and Tucker [the names of Elise’s assistants in the movie] about were what are that stakes in this and in my life? What made me go here and made me want to do this. What has allowed me to really intensify this talent that I have, and what’s been my experience. I tried to make it personal for her so that it would heighten the stakes of helping another family.”