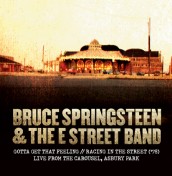 After the exceptional box set THE PROMISE which provided not only a remastered version of DARKNESS ON THE EDGE OF TOWN, but also through in a bonus disc dubbed THE PROMISE of 21 additional tracks that were shelved in favor of a different approach to what eventually became DARKNESS, now we get a post-script to that side project.

Springsteen and his E Street Band are releasing a DVD and Blu-ray on the making of DARKNESS and have culled two live cuts for this special Record Day 2011 exclusive.

Eschewing a traditional 7 inch 45 single, they supersized it a bit to a 10 inch record and it’s a pretty cool collector’s item.

“Gotta Get that Feeling” was a great track off THE PROMISE and it sounds excellent in its live incarnation from the Carousel in Asbury Park circa 1978. The actual DARKNESS tracks were very dark indeed, but “Gotta Get That Feeling” is simply delightful, with an upbeat tempo and ebullient vibe throughout.

“Racing in the Street” appeared on DARKNESS in a different form, and this live version is also a bit peppier. It’s still a fantastic song (whichever version you prefer) and the extended live riffing again shows how great a live artist Springsteen and his E Street Band was and still is.

It’s disheartening to think that some of the extra tracks from THE MAKING OF THE DARKNESS ON THE EDGE OF TOWN will only be available on DVD and Blu-ray, but at least we get this 10 inch to tide us over.

As a note to collectors, there’s a misprint on the back of the sleeve of this disc calling “Racing in the Street” – “Racing in the Sreet.” I doubt there will be a reprint, but it is interesting to see such a glaring error on such an important Record Day release.