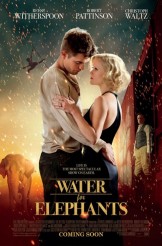 An old-fashioned romantic period drama, set in the circus and showing off Reese Witherspoon, Robert Pattinson and Christoph Waltz to great advantage

Based on Sara Gruen’s novel, WATER FOR ELEPHANTS is a big movie that feels in many ways like it could have been made in the ‘50s or ‘60s, with its forbidden romance, circus spectacle and mostly noble hero. The most modern aspects of the movie are concern for animals and acknowledgment that quite a few non-humans were and are smarter than humans gave them credit for. The view of the Depression is what might be called “progressive,” but it’s hardly modern – John Steinbeck was writing with a similar attitude seven decades ago.

A brief prologue introduces us to now elderly Jacob Jankowski (Hal Holbrook), who arrives just as a traveling circus is closing up shop on a rainy night. It turns out Jacob had a circus career that began in 1931 with the ill-fated Benzini Brothers troupe (the prologue lets us know that the Benzini Brothers didn’t go past that year).

We are then introduced to Jacob as a young man (Robert Pattison), studying veterinary medicine at Cornell University. Unkind fate strikes and Jacob hits the road, but he fortuitously winds up aboard a train carrying the Benzini Circus to its next gig. Jacob is willing to take any sort of job that provides food and shelter, but soon enough, he comes to the attention of the circus’ proprietor, August Rosenbloom (Christoph Waltz). It turns out that the Benzini Brothers Circus doesn’t have a veterinarian on hand for its animals, and Jacob’s skills (and lack of financial demands) are just what the outfit needs.

Jacob finds himself extremely smitten with the circus’ star rider Marlena (Reese Witherspoon), who happens to be August’s wife. Then August purchases aging elephant Rosie (Tai) and decides that Jacob should train the animal for Marlena to ride as the new top-draw attraction. There’s attraction, all right, and with August’s melancholy, temperamental and violent disposition, it’s only a matter of time before all sorts of things happen.

There is a pleasing folkloric quality to both Richard LaGravenese’s screenplay and Francis Lawrence’s direction – the mood (though by no means the particulars) is reminiscent of BUTCH CASSIDY AND THE SUNDANCE KID, by turns funny and bleak. Love of animals and what animals can do is important to the story here, and anger at those who abuse animals in their charge is palpable. Tai the elephant gives a remarkable performance, which puts us very firmly on the side of the humans who love her (there is a meta issue as to whether any elephant should be made to perform, even to make a point in favor of animal welfare, but that’s a separate discussion).

The three human actors at the top of the bill are also excellent. Witherspoon is luminous, made to look like a ‘30s movie star and still like she belongs in the world of WATER, an accomplishment that speaks well both of actress and filmmaking team. Witherspoon also gives Marlena surprising warmth that brings added tenderness to the proceedings. Waltz is so charming and has so much showmanship as August that we understand how the character commands such loyalty, even when he has such vivid flaws. Waltz also shows us the pain and helplessness underlying the character’s compulsion toward violence. Pattinson has the most straightforward of the lead roles. Jacob is a good man with a great deal of compassion and a reasonable sense of humor, all qualities that Pattinson puts forth effectively.

WATER FOR ELEPHANTS is a well-done and engaging film. Something about it holds us at a slight remove – perhaps it’s the framing device, which spells out much of what we’re going to see before it’s shown to us, perhaps it’s the movie’s old-fashioned, overly earnest nature – but overall, it works.