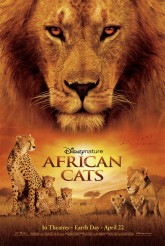 A beautiful film that would be better without the voiceover

I grew up watching DISNEY TRUE LIFE ADVENTURES in school. They were old even then, but I still loved seeing them. It clearly has been years since I have watched any of them which were very cute and given the Disney treatment to take the edge off of stories in nature.

AFRICAN CATS is in some ways exactly what I expected – a throwback to those older Disney nature film. It is a beautifully shot film as the landscape and the animals depicted are gorgeous. The entire size and scope of the film, and the time span involved in shooting it is a credit to the filmmakers.

The movie follows two different African Cats, one a lioness in the last stages of her life, and the other a Cheetah who is trying to raise a group of cubs on her own. The story takes place over the course of a year as various trials and tribulations befall the animals. It is well paced and interesting to watch, and should entertain most kids (as long as they have a decent attention span- really young kids were tuning out during the screening I saw).

The film is narrated by Samuel L. Jackson, who is honestly one of my favorite actors. However, in this film I wasn’t impressed with his voiceover. No matter what was happening on screen his voice seemed to have a lilt to it that almost sounded bemused with himself. His tone is as if he is telling the story to a Pre-K youngster, and it almost seems as if he is worried that the narrative might be to complex even as it is. The result is a film that makes you feel as if it has been dumbed down to play to a young audience without retaining any of the appeal for an old viewer. Most Disney films find a way to strike a balance between youth and the parents or family that will be accompanying kids to these movies, but this one sadly falls short of the mark.

Parents concerned with violence need to know that there are some animal attack sequences in the film. There is a surprising lack of blood or gore in the film. It has been cleverly edited and put together so that the most graphic displays of violence take place just off camera, so there is very little trauma to a child viewing the film. It doesn’t ignore that lions and cheetahs feed off the live flesh of other animals (and there is one scene where the lioness’ fight with the dominant male over a freshly killed zebra), but even that is toned down in how much of the feeding is shown.

AFRICAN CATS is a good film to take kids to so they can start to learn about animals and countries different from their own. It is a beautifully shot and executed film, and if you can get past the “cutsie” Disney elements, making the animals vaguely cartoonish then you should be fine. Again, remember that very young children will probably get bored partway through, and the animals themselves, like the male lions, might be frightening.