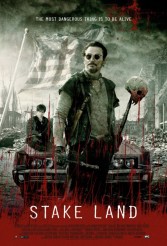 STAKE LAND works on some basic levels – one can reasonably go into this post-apocalyptic horror movie expecting action and blood and be rewarded with plenty of both. An added bonus is some really gorgeous cinematography by Ryan Samul, which makes us feel like we really are somewhere bleak and abandoned, yet weirdly beautiful.

In STAKE LAND, adolescent Martin (Connor Paolo) sees his family slaughtered by vampires, but he is rescued by the timely arrival of expert vampire hunter Mister (Nick Damici, who co-wrote the script with director Jim Mickle). The world has been overrun by vampires, but Mister is aiming for a far-off and possibly non-existent safe zone. Along the way, he teaches Martin the tricks of the vampire-killing trade while they pass through small fortified towns. It turns out vamps aren’t the only problem in this tattered realm. A group of religious fundamentalist white supremacists known as the Brethren holds sway in many areas. When Mister and Martin rescue a nun (Kelly McGillis) from rapacious Brethren members, the Brethren’s leader Jebedia (Michael Cerveris) takes it as a personal affront.

STAKE LAND has some of the meditative, Western-like feel of THE ROAD, though the interplay between man and boy here is far less complex and affecting. The film works as horror travelogue, and viewers who like terse, no-name protagonists will enjoy Mister’s gruffness, which is well-played by Damici. Paolo likewise scores as the sensitive, sensible Martin.

However, STAKE LAND’s mythology on both the character and creature levels raises a number of questions. We can’t help wondering why our heroes (Martin in particular) don’t settle in one of the friendly, well-guarded communities they encounter rather than pressing on, since this is clearly a case of a known quantity in the hand versus a rumor (that sounds pretty much like what they’ve already found) in the bush. There’s also a whopper of a rule change in the third act that isn’t set up properly beforehand.

The script by star Damici and director Mickle, who previously collaborated on MULBERRY STREET, has the vampires behaving like fast-moving zombies. For those wondering why this feels like a problem instead of just a choice in storytelling: vampires (even the completely hostile ones) generally have some kind of strategy-making capabilities, whereas zombies, while deadly, can be easily outwitted. Having the vampires behave like zombies is novel, but the only apparent narrative gain here is that the humans can move around in daylight, whereas the loss is that it makes the vamps in general less formidable unless they’re swarming. The fact that we start contemplating this meta issue during the film means that we’re not as engrossed as we should be.

Don’t misunderstand – if you want to follow a few tough folks battling their way through a monster-infested world, STAKE LAND delivers. It just could have been thought out more thoroughly.