Home » Movie Review: THE GIRL WITH THE DRAGON TATTOO 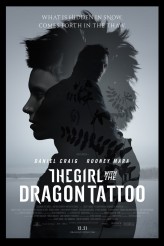 ©2011 Sony Pictures
THE GIRL WITH THE DRAGON TATTOO poster
Reviews

Movie Review: THE GIRL WITH THE DRAGON TATTOO

A fairly engrossing thriller with strong characters and some vivid violence

Anyone who has read Stieg Larsson’s novel THE GIRL WITH THE DRAGON TATTOO, the first installment in the late writer’s “Millennium Trilogy,” will recognize nearly all of the characters and plot developments. True, Steven Zaillian’s screenplay condenses some details, but on the whole, this English-language adaptation (a Swedish version was made in 2009) is quite faithful.

However, there is a difference between reading a scene and seeing it depicted onscreen. In the film as in the book, our title heroine Lisbeth Salander (Rooney Mara) takes extreme but understandable vengeance after having been heinously violated. In the book, we’re somewhat in Lisbeth’s head, which has the effect of softening her somewhat. In the film, while the thin, slight Mara has perfected the art of letting Lisbeth have a bland expression with just a hint of emotion in her eyes, she thereafter comes off like one of the most potent badasses the movies have ever seen. We’re not afraid someone will attack her because we think she may be harmed; we’re afraid of what she’ll do to the next person foolish enough to provoke her.

As in the novel, for a good while, Lisbeth’s story runs parallel to that of Mikael Blomqvist (Daniel Craig), a Swedish journalist who is smarting after losing a libel suit, even though his story was true. While licking wounds of ego and finances, Mikael is hired by wealthy, elderly industrialist Henrik Vanger (Christopher Plummer) to dig into what happened to Henrik’s niece Harriet, who disappeared as a teenager in 1966. Henrik is convinced Harriet was murdered by a family member. For reasons made clear in the narrative, Lisbeth agrees to work as Mikael’s research assistant; Mikael only knows that Lisbeth is an expert computer hacker, not that she is physically formidable when angered. The two of them discover they are on the trail not only of the fate of Harriet Vanger, but also of the crimes of a serial killer.

Much of THE GIRL WITH THE DRAGON TATTOO consists of Lisbeth and/or Mikael doing research, punctuated by some startling and alarming incidents. In this, TATTOO somewhat resembles ZODIAC, one of director David Fincher’s other films. Fincher is great at establishing an atmosphere of tension and possible doom, so that we watch people performing mundane tasks like file-sorting and computer exploration with a sense of dread, rather than impatience. It helps that the swirling snowy landscapes here are both beautiful and foreboding.

Mara commands respect without either her or Lisbeth forcing the issue. The character isn’t shy, but has no interest in drawing attention to herself. She simply wants to satisfy her curiosity and be left to her own devices, though her armor is not too thick to preclude the possibility of friendship. Mara understands where the balance is in all this and plays it with subtlety and intelligence.

In turn, Craig – who has been highly effective as a brutal James Bond – demonstrates that he has a fine grasp of a very different sort of person. His Mikael is decent, good-hearted and bright, but also at a very convincing loss when faced with a physical threat.

There are some structural issues here. For the film to depict the serial killings in detail, as the book did, would tip it from thriller into straight horror, which is clearly not the intention. However, in trying to keep exposition down to a manageable level, some key story points go past so swiftly that they don’t really register.

Still, Fincher, Zaillian and the cast keep the pace propulsive. There’s never a sense that the film is stalling out; everything that happens holds our attention and increases our curiosity. Craig and Mara both have strong screen presence; in Mara’s case, she’s giving us a character we’ve rarely seen before, certainly not with this level of conviction in a major studio release. THE GIRL WITH THE DRAGON TATTOO is a film with an impact that lasts well after it is over.