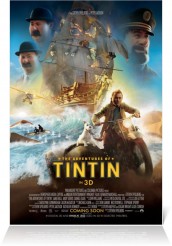 Movie Review: THE ADVENTURES OF TINTIN

THE ADVENTURES OF TINTIN is a curious sort of film. Based on the comic book series by the Belgian writer/artist Herge (real name Georges Prosper Remi, 1907-1983), the motion-capture adventure gives dimensionality to the look of the original artwork, but relies on a kind of Boy’s Own Adventure sensibility that seems a little thin by contemporary standards. Director Steven Spielberg has a blast with a lot of Rube Goldberg comedic action set pieces that are fun to watch, but the script by Steven Moffat and Edgar Wright & Joe Cornish never fully draws us in to what we’re watching. The film proves again that Andy Serkis is absolutely amazing and can do anything – at least, it’s hard to imagine many other performers versatile enough to handily enact Gollum, the crazy sound engineer in 24 HOUR PARTY PEOPLE, Caesar the ape and now the fuddled seaman here.

Tintin (Jamie Bell) is a young but experienced reporter working out of – well, it’s supposed to be ‘20s Paris, but everyone speaks with English accents (maybe he crosses paths with Hugo Cabret when we’re not looking). On impulse, Tintin buys a beautifully-constructed model man-o’-warship and is promptly offered a vast sum of money for it. Tintin refuses, realizes there must be something special about the ship and starts researching it, but before he can find out much, he is kidnapped and imprisoned aboard a ship that’s been taken over by the upper-crust but dastardly Sakharine (Daniel Craig). Fortunately for Tintin, his loyal dog/sidekick Snowy has stowed away and is ready and able to help his master escape. The ship’s real commander, Captain Haddock (Serkis), is a major alcoholic, but he’s also a big part of the key to the mystery. Tintin, Haddock and Snowy embark on an adventure that carries them to a number of exotic locales and into some very dangerous situations.

Explaining exactly what the adventure is all about would spoil the mystery. The problem is, despite Bell’s forthright charm, Serkis’ deftly dazed comedic timing and the splendid CGI animation of Snowy, it’s hard to get very worked up about what’s happening. There are comparisons to be made between TINTIN and RAIDERS OF THE LOST ARK, but there are two crucial differences. First, while Indiana Jones loves adventure, he’s generally motivated by something larger. In RAIDERS, he’s trying to keep what might be a powerful weapon – the Ark – out of the hands of the Nazis, proven bad guys. In TINTIN, Tintin seems to be motivated simply by curiosity and stubbornness. These are certainly good qualities in a hero, but despite all the physical perils (most of them comic), we never feel like there’s a great deal at stake.

Second, and perhaps more important, TINTIN is populated by a primarily human cast and, though much of the CGI animation is brilliant, the film is the latest to apply this art form without fully mastering human eyes. The characters have great general facial expressions, but there is still something artificial about their gazes. With Indiana Jones, we looked into Harrison Ford’s eyes and saw a soul – yes, he was an actor playing a character, but someone was home. When we look deep into Tintin’s eyes, we see well-shaped pixels, and it makes a difference. (For anyone who wants to bring up AVATAR, no one has seen a Na’vi in real life, so we can’t say there is something off about the eyes. We all have seen young men’s eyes.)

Some of the throwaway slapstick is lovely, like a bit where Tintin gets knocked over outside a pet store, with the appropriate visual cue being something that’s also happening in his immediate environment. Other jokes overstay their welcome, with the efforts of dense police inspectors Thompson (Simon Pegg) and Thomson (Nick Frost) to recover some stolen wallets going on especially long.

THE ADVENTURES OF TINTIN has real artistry and humor, and fine performances by the motion-capture actors. However, the characters aren’t real enough to grab us, and without that, we’re too aware of the well-trod path they’re on to be engrossed.