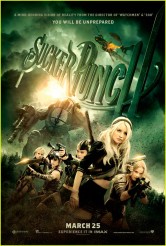 There are some worthwhile ideas roaming around inside of SUCKER PUNCH, but like the film’s heroine, they are trapped several layers away from reality.

Just to be clear, SUCKER PUNCH’s director/co-writer/story creator Zack Snyder made his feature directorial debut with one of the most compulsively watchable movies ever, the remake of DAWN OF THE DEAD. Although zombie movies were nothing new even in 2004, Snyder and writer James Gunn took the possibilities and ran with them, coming up with great character moments as well as really kickass action that doesn’t lose anything on repeat viewings. 300 and WATCHMEN, Snyder’s next two efforts, were tied to graphic novel source material and didn’t shine as brightly. Now Snyder has invented his own universe, with co-writer Steve Shibuya, and while it’s possible to see what he was going for, it’s also hard to avoid seeing where he went very wrong.

We meet Babydoll (Emily Browning) in a sepia-toned music montage, where she and her little sister mourn their mother’s death while her evil stepfather rips up the will that would give the two girls the estate. When Stepfather tries to rape Babydoll, she fends him off, so he kills the younger sister and frames Baby Doll for the crime. Babydoll is packed off to a grim mental institution, where a corrupt orderly, Blue (Oscar Isaac), takes a bribe from the stepfather to have Babydoll lobotomized. Babydoll suddenly imagines the whole place as a combination brothel/musical hall/prison, where Blue owns all the girls, even Polish choreographer Madame Gorski (Carla Gugino), the alter ego of a doctor at the mental hospital.

When Babydoll is forced to dance, she has visions of epic adventures, first solo, then accompanied by her fellow dancers/inmates Sweet Pea (Abbie Cornish), Rocket (Jena Malone), Blondie (Vanessa Hudgens) and Amber (Jamie Chung). In Babydoll’s visions, the quintet makes up a Charlie’s Angels-like military team, advised by the Old Man (Scott Glenn). It turns out that while Babydoll is dancing to the rhythm of her visions, all of her male watchers are so entranced that it’s possible for her cohorts to steal items that may make it possible for them to escape.

However, you may be asking, if this is all Babydoll’s fantasy, what is actually going on in the “real” world of the asylum? This is an excellent question that is not addressed in any meaningful way. Unlike, say, PAN’S LABYRINTH, where we’re always aware of what the young heroine is doing whether her visions are real or not, Babydoll is as passive as can be. Given that a few words from her might make all the difference to her situation, we can’t really buy that her internal fight is really what matters.

Snyder also chooses never to show us either Babydoll’s supposedly mind-bending dances or even a crucial and much-talked-about facial expression. This is asking the audience to take many key matters on say-so. It doesn’t help that Browning, who has shown herself to be an effective actress elsewhere, is made up to closely resemble Paris Hilton, of all people, and was evidently instructed to keep emotional response to a minimum. It’s hard to reconcile what we’re looking at with the filmmakers’ reported desire to make some sort of feminist fantasy, since most feminists don’t see themselves dressing in SAILOR MOON-type outfits, being relatively clueless, taking instructions from old men and, above all, not speaking up, especially when to do so could be useful.

Not that SUCKER PUNCH is any kinder to its male characters. All men showing any kind of sexual desire (this would be all male characters except for Glenn’s) are depicted as rapacious monsters. If heterosexual men were a discriminated-against minority, this movie would come in for protests from activists regarding the uniformly negative stereotypes.

Then there are the fantasies-within-fantasies, which so resemble videogames that sometimes the actors within them seem to be avatars (with a small A) rather than human performers. As trailers for games, these are great, but they are liable to frustrate those viewers they are most meant to entice, since gamers seldom like sitting on the sidelines watching while others hog the controls. For non-gamer viewers, these sequences quickly become repetitive, neither moving the story forward (there is no corollary in either the dance hall or the asylum, for example, for mowing down Nazi zombies) nor engaging us emotionally.

The fantasy CGI sequences are set to new versions of pop standards, like “Sweet Dreams Are Made of These” and “Go Ask Alice.” These are fine songs, and it’s interesting to see what amounts to music videos designed around them, but the cumulative effect is more browbeating than wondrous, with lots of sound and not enough substance.

Without giving away the finale, both the actual conclusion and the moral we are given in voiceover seem deeply unearned. However, viewers who stick around are rewarded by the closing credits, as Gugino and Isaac treat us to a rip-roaring duet on “Love is the Drug.” It has nothing to do with how their characters interact elsewhere, but it’s a blast.

Otherwise, SUCKER PUNCH is largely a disappointment. We are told within the film what is intended, but that intention seldom translates to something that we can see and/or feel.