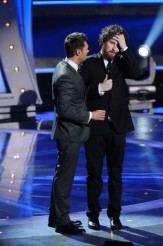 Stefano Langone and Thia Megia both in the bottom, however, Casey never should have been there

And this was a shocker.

Just when you think you have it figured out that the tweens are dominating the competition by putting chicks in the bottom three for the past two weeks, everything goes topsy-turvy and we have two dudes in the bottom, not to mention all three people that have not yet been in the bottom.

Jacob Lusk, Pia Toscano, Scotty McCreery and Lauren Alaina are first and all three are safe.

James Durbin and Paul McDonald join the stage and after a surprise appearance from Hulk Hogan, both are safe.

Stefano Langone and Thia Megia are next and surprise both are in the bottom for the first time.

Then Haley Reinhart, Naima Adedapo and Casey Abrams are brought on stage and this seems like a shoe-in but, say what, Casey is in the bottom? How did this happen? He is one of the best in the competition?

So our bottom three are Thia, Casey and Stefano. Totally screwy considering none of those in the bottom before were in this week but I guess maybe the IDOL voting audience is more clever than I give them credit for.

Thia is safe and our first guy will be going home.

Surprisingly, Casey got the least amount of votes somehow … uh, how did that happen? He rocks it. I don’t get it. Luckily, the judges did the right thing and despite his constant cursing which I found hilarious considering they had to bleep him out, they save him from elimination.

Seriously, I don’t know how Casey was saved over someone like Stefano or Thia or Haley or Naima or Paul or Lauren. Hopefully, people will vote better next week.