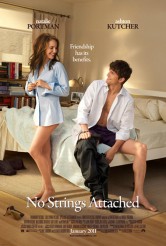 Natalie Portman and Ashton Kutcher star in what feels like the extra-lite remake of LOVE AND OTHER DRUGS, minus the scary illness and pharmaceuticals

Sometimes there is no accounting for what turns people on, let alone what people think will turn other people on. Natalie Portman and Ashton Kutcher are, together and separately, talented and attractive, and there’s nothing really offensive about their romantic comedy NO STRINGS ATTACHED. True, it defies logic and credibility in several major ways and its tone manages to be bland yet inconsistent, but it’s not mean-spirited, which gives it some points.

Anyone who saw the relatively recent LOVE AND OTHER DRUGS may understandably experience some flashbacks, as once again, a gorgeous young woman adamantly insists she wants only sex, not romance, from an appealing and initially obliging young man. Eventually, of course, he falls in love with her, and she falls for him, which freaks her out so much that she pushes him away, but then … you know where this is going, right?

In LOVE AND OTHER DRUGS, there was some underlying motivation in the woman’s panic, and the man started out as a player, too. In NO STRINGS ATTACHED, we are given only a vague verbal explanation (that actually contradicts what we’re shown) for the tense behavior of Emma (Natalie Portman), a young doctor who lives with three colleagues who doesn’t want emotion to undermine her career.

She finds a willing sex buddy in Adam (Ashton Kutcher), a production assistant whose famous actor father (Kevin Kline) has hooked up with Adam’s old girlfriend (Ophelia Lovibond). Emma and Adam have actually known one another since summer camp, and Adam has been crushing on her in the intervening years, but he tries to follow Emma’s dictates on what their relationship should and should not be until he has to show his feelings.

Portman has demonstrated considerable skill at playing people who don’t know what to do with their own desires (see BLACK SWAN), and she brings as much intelligence and intensity to bear as she can to her portrayal of Emma. However, the screenplay by Elizabeth Meriwether, from a story by Mike Samonek and Meriwether, gives Emma some really bizarre actions, like inviting Adam (years before their hookup) to an event, without warning him that it’s a funeral. Although he is inappropriately attired, Adam takes this in stride.

Likewise, both Emma and Adam seem remarkably thick-headed and inconsistent about the whole “no strings attached” business. After Emma insists she does not want a relationship, the clearly smitten Adam shows up after their first tryst with a Mylar balloon for her, which is almost as weird as Emma not recognizing this as a romantic gesture.

Kutcher exudes kindness and good humor, which goes a long way in these situations, Kline has droll delivery and some funny things to say and director Ivan Reitman moves things along at a reasonable sitcom pace. In the end, NO STRINGS ATTACHED is the sort of movie you can watch once with no harm on either side, but it’s unlikely you’ll settle into a long-term favorite film relationship with it.