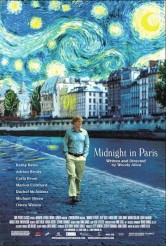 Woody Allen returns to being funny, sweet and optimistic in this comedy/fantasy set in Paris

Woody Allen has been writing and directing movies since 1969’s TAKE THE MONEY AND RUN (or 1966’s WHAT’S UP, TIGER LILY? If one counts his before-its-time MSTK redubbed take on a Japanese spy film). He started out as a farceur, then did comedy/dramas, then tried straight drama and by 1980, he made a movie called STARDUST MEMORIES where aliens told his onscreen alter ego (played by Allen) that they preferred his “earlier, funnier” work.

Those aliens – and a lot of Earthlings, too – should be pleased by Allen’s latest work as writer/director, MIDNIGHT IN PARIS. The movie is relatively light and fluffy. It is also charming, not only because Allen revels in the Parisian locations – though as captured by Darius Khondji’s cinematography, the surroundings are lovel – but because the comedy is derived from affection rather than contempt for the characters. Unlike the folks in a number of other recent Allen outings, the people in MIDNIGHT aren’t meant to be so awful and self-deluded that they’re comical. Instead, they are funny because they are either happily dazzled, like our protagonist Gil Pender (Owen Wilson), or because they are wonderfully true to their outsized selves.

Gil is a Hollywood screenwriter who is a financial success but feels that he’s a hack. In search of some artistic satisfaction and perhaps figuring out exactly who he is, Gil is working on his first novel. He’s in Paris with his fiancée Inez (Rachel McAdams) and her wealthy, conservative parents (Kurt Fuller and Mimi Kennedy) who don’t approve of the match. We can certainly tell Gil and Inez don’t belong together, but Gil is only aware of a vague sense that he’d like to explore Paris more. Walking on his own after midnight, he discovers a very different city than the one he knows by daylight – but in many ways, it’s the one he knows by heart.

Other reviewers will probably give away the central plot twist of MIDNIGHT IN PARIS, but in an effort to avoid being too spoilery here, let’s just say that Gil meets a lot of extremely interesting people, played by a skilled horde of actors who are entirely invested in what they are doing. Standouts include a thoughtful, kind Kathy Bates, a buoyantly loopy Adrien Brody and, probably best of all, a very self-assured Corey Stoll. Marion Cotillard is radiant as a woman who attracts everyone in her orbit, with good reason.

Allen makes some gentle, good points about how one person’s inspiring nostalgia is another person’s mundane existence, something that can reverse itself into finding romance (of both the classic and interpersonal varieties) wherever one is willing to look for it.

Through no fault of the actors, MIDNIGHT falters a bit whenever it gets into the disintegrating relationship between Gil and Inez, since this territory has been pretty thoroughly explored by Allen and others in the past and there are no new insights this time around. However, Michael Sheen manages to be pretty funny as a pompous American art expert who appalls both Gil and a French tour guide (Carla Bruni), even as he appeals to Inez.

MIDNIGHT IN PARIS is frothy, witty, droll and a little enchanting – all qualities often associated with the City of Light. It doesn’t provoke a deep visceral response, but it’s still very likable.