Home » Movie Review: DO NOT DISTURB 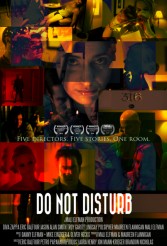 Movie Review: DO NOT DISTURB

Hotels lend themselves to anthologies of both the literary and cinematic varieties. Back in 1995, Quentin Tarantino, Robert Rodriguez, Allison Anders and Alexandre Rockwell joined forces on the movie FOUR ROOMS, which was playful and noirish. Now producer Mali Elfman, who came up with the underlying concept (she gets a “created by” credit) has brought together a group of diverse writers and directors to make DO NOT DISTURB, which switches up the tone from segment to segment so much that the movie is almost its own film festival.

The binding agent here is what the credits call “Maids Sequence,” where a pair of bored, reluctant-to-work hotel maids dump everything on the only colleague (Diva Zappa) who is willing to do the job. This maid winds up getting pulled into a couple of strange incidents, while staying far from others.

The funniest and arguably best sequence is the first, “Duccios Madonna,” written by Christie Ko and directed by Eric Balfour in a manner that suggests early material by Mike Nichols and Elaine May, with a man (Harris Goldberg) hires a prostitute (Maureen Flanigan) for a very unusual purpose. It has a wonderful, weird deadpan build that pans out perfectly.

“Rocketman,” written and directed by Petro Papahadjopoulos, starring “Duccios Madonna” director Balfour and TRUE BLOOD’s Lindsay Pulsipher, is the kind of trippiness for the sake of trippiness that could often be found in late ‘60s/early ‘70s sci-fi/drug indie filmmaking. As a vignette, it’s actually fine (though it may remind some of us how annoying this sort of thing can be when stretched to feature length).

“Prom,” written and directed by Laura Henry, is a gentle, pleasant look at two very different high school boys who are thrown together as roommates when their graduation class splurges by traveling to L.A. for prom.

“Intrinsic” flows into “Death Takes a Holiday Inn,” with both exuding noir-ish black comedy as layers of betrayal (and a few other things) pile up in the hotel room and Zappa’s resourceful maid is presented with a vexing situation. Producer Elfman and Troy Garity appear effectively as a couple who have retreated to the hotel room together, but don’t know one another well.

Nobody should go into DO NOT DISTURB expecting either a conventional horror or comedy anthology, as while some aspects are sinister, they are never actually scary, and not all of the segments go for laughs, even naturalistic ones. The film is instead a true grab bag of themes and styles, bound together primarily by location and budget. There is something really enjoyable (if one enjoys this sort of thing in the first place) about knowing it’s time to make a mental adjustment as each new sequence begins, absorbing the new rhythms and plot strands, and then making the jump again. All of the episodes have attributes to recommend them, though again, “Duccios Madonna” is the standout of the batch. Danny Elfman composed the appropriate score.

Most of all, DO NOT DISTURB is an illustration of just how much variety and production value can be packed into a few locations, a low budget and a lot of good ideas.