Movie Review: PIRATES OF THE CARIBBEAN: ON STRANGER TIDES 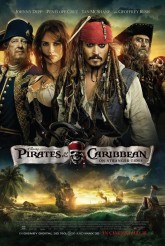 Movie Review: PIRATES OF THE CARIBBEAN: ON STRANGER TIDES

A fourth film that is as strong as the original

PIRATES OF THE CARIBBEAN is a film series that I think could probably just keep going like the Energizer Bunny. People didn’t react as kind to the last couple of PIRATES sequels as well as they did the first film though. Complaints concerning films two and three (DEAD MAN’S CHEST and AT WORLD’S END)were that there were too many storylines going all over the place, and the films became something of a mess. There were also complaints about the love story between Orlando Bloom’s character and Kiera Knightly’s character.

I honestly liked all three PIRATES films. I just went to have fun and to be entertained and I was never let down. I didn’t LOVE the later sequels, thoughI felt that AT WORLD’S END was the stronger of the two.

Now PIRATES OF THE CARIBBEAN: ON STRANGER TIDES continues the storyline that everyone wanted to see the most of, the adventures of Captain Jack Sparrow (Johnny Depp). I doubt that very few people would argue that Jack Sparrow is the lynchpin of the entire film series, and the films that focused too much on other characters suffered for it. ON STRANGER TIDES is in my humble opinion the strongest of the films since the original. It has a solid central storyline, plenty of action, adventure, supernatural happenings, and yes even a bit of fun romance to keep the audience entertained.

The basic premise  follows Jack as he becomes a part of Blackbeard’s (Ian McShane) crew and quests for the mythical fountain of youth. Jack is reunited with an old flame Angelica (Penelope Cruz) and of course crosses paths with his old frenemy Captain Barbossa (Geoffrey Rush) who is now on the King’s side of the law.

All of the actors are bang on. I have a love for anything villainous, and Barbossa is honestly one of my favorite parts of the PIRATES movies, so I was extremely pleased to see his new character arc for this film. McShane as Blackbeard is fantastic, and his performance is subtle and threatening and he casts an imposing shadow in the film. Cruz, (who is honestly not one of my favorite actresses due to the fact that I can almost always catch her looking right at the camera in almost every movie) is quite enchanting and just plain fun. She looks like she had a blast making the film, and it’s easy for an audience to fall in love with her character.

Depp as always is perfect. Jack Sparrow for him must seem like a comfortable set of clothes that he can wear at this point, having played the character so many times. Jack is just what everyone wants him to be, and this film also seems to steer him on a new course for even more PIRATES adventures.

The production quality on this movie was phenomenal as always. The costumes and make-up are fantastic, and Blackbeard even has a smoldering beard through much of the movie. The best thing in the whole film is his ship The Queen Anne’s Revenge. It’s a floating work of art covered with skeletons, torches, and ornate carvings.

People that fell away from PIRATES during two and three should give number four a shot. I think they will find that this is a return to the feel of the first film, and hopefully bodes well for future installments in the series.