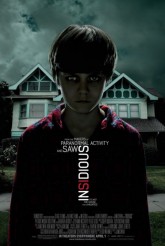 A movie that will make you sweat with fear

Let’s just start right off the bat by saying that I love horror movies of all kinds and shapes. I watch them like people eat candy, and I don’t get scared. I might have a movie here or there that makes me jump or produced a surprise reaction, but I generally don’t get freaked by a movie.

INSIDIOUS on the other hand, made me sweat. I literally sweat through my shirt to my jacket. This movie had me on edge. I crushed my press notes, which I’ve never done, and saved them as a reminder just of what this movie had done to me.

INSIDIOUS is the latest collaboration from James Wan and Leigh Whannell, the men who gave us the joyous and fun-filled romp of the SAW movies. This movie is as far removed from SAW as you can possibly get. There’s no gore, very little violence, almost no swearing and no sex. And….I just lost part of the hardcore horror fans that go to horror movies for all of those reasons. If I didn’t lose you, read on, because while I think movies like SAW are fun, INSIDIOUS sacred the living crap out of me. It takes a certain kind of movie to get under your skin, make your heart pound, and make you think about it two days later in the wee hours of night when you think you see a shadow standing in from of your deck doors at 3 A.M.

INSIDIOUS is a ghost story, but there is so much more to it than that. It tells the story of a normal all-American family who are beset by a haunting, and who have a son who is in direct danger from these spirits. The movie isn’t your typical haunted house film, and has a number of twists and turns to keep you interested and in your seats.

One of the best things about the film is the use of practical ghosts and supernatural elements. All of the spooks are on-set actors in make-up and they are incredibly effective because they were really there. The lipstick faced demon was a real person in a suit and make-up as well, and there are times when you barely see him and want to run just from the glimpse. I have no real problems with CGI effects, in their proper places, but for this type of movie the practical ghosts worked so much better!

All of the actors were top-notch and you really cared what happened to the family almost from the word go. Lin Shaye comes into the picture as Elise the psychic, and gives a refreshingly normal performance as opposed the usual voodoo and hokum spirit mediums so often depicted on film.

The scares are tight, and the movie has little or no pacing issues. The plot keeps moving rapidly forward, and the suspense somehow lasts up until the credits role. By the way, stay until the very end for a little bonus scene.

My only gripe with the movie was that they showed a bit too much of all of the supernatural elements towards the end of the film. The ghosts and the demon are incredibly effective, and perhaps even more so, when they aren’t being shown in full light. Other than that, I really had no problems with the movie at all and thoroughly enjoyed being scared while watching it.