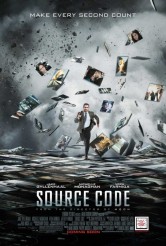 SOURCE CODE is one of those movies with a TERMINATOR-like time paradox that causes audiences to leave the theater with furrowed brows. However, the movie comes by its twists honestly, paying off the things it sets up and vice-versa, so that everything is neatly and briskly addressed. Better, director Duncan Jones and writer Ben Ripley let us understand early on what’s happening but keep us guessing throughout as to exactly where this is going and how it will all pan out.

Captain Colter Stevens (Jake Gyllenhaal) is having a really bad time when we meet him. He doesn’t understand why he’s on a Chicago commuter train, he doesn’t recognize Christina (Michelle Monaghan), who’s seated across from him and talking to him like they know each other, and he sees another man’s face when he looks in the bathroom mirror. Then the train explodes, and Colter finds himself in a strange dark room, communicating with USAF Capt. Goodwin (Vera Farmiga) via a video screen.

Colter remembers he’s a military helicopter pilot who should be back in Afghanistan, but somehow he’s been drafted into the “source code,” as the project and technique is known. Goodwin and her team know about the train explosion. Colter’s job is to find the bomber by going through the same eight minutes, in the identity of one of the explosion’s victims, before the detonation, each time doing things differently, to prevent the bomber from causing a larger and even deadlier detonation. The more Colter learns about what’s actually going on, the more he wants to prevent the original bombing, but he’s told this can’t be done – he cannot affect the past, only the future.

We have a pretty good guess before Colter does as to why he’s been chosen to handle the “source code” mission, but because director Jones keeps the pace zipping along, Ripley’s script is so genuinely clever and Gyllenhaal, Monaghan and Farmiga are all so likable, we’re willing to watch the substantial change-ups as they happen and actually want to know where it’s all leading. It’s a testament to the skill of the filmmakers that even though we can anticipate how the ending is going to feel, we are still kept in a state of curiosity as to how we can possibly get there and what will happen to bring it about.

Screenwriter Ripley wisely doesn’t attempt to get into what kind of scientific technology is behind the source code. Everybody, especially actor Jeffrey Wright, has fun with the supercilious scientist who invented the source code but just can’t be bothered to explain how it works to poor Colter.

Gyllenhaal is very human and humane as the driven hero, whose nature compels him to try to prevent catastrophe, no matter how much pain it causes him. Monaghan is warm and charming. However, it’s Farmiga who anchors everything. If any of us were unlucky enough to wind up in Colter’s position, Farmiga’s Goodwin is the compassionate soul we’d want helping us out.

There are unanswered questions at the end of SOURCE CODE and, although it is opened up as much as possible, there’s a certain element of repetition as Colter keeps revisiting the scene of the crime to find evidence. Mostly, though, SOURCE CODE satisfies as both science-fiction and crime thriller.

CLICK HERE for EXCLUSIVE photos from the SOURCE CODE premiere