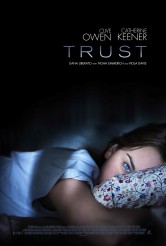 Statutory rape – an adult having sex with a minor, even when the minor consents – is an illegal act that occurs far more frequently in reality that most people would like to acknowledge. It is deemed to be legal rape because, in the eyes of the law, a minor is incapable of giving informed consent – at age fourteen, for instance, an adolescent literally doesn’t have enough information accumulated through life experience to make a sound judgment about having intercourse with a thirty-five-year-old.

TRUST isn’t perfect, but it feels like it gets the psycho-dynamics of the situation (at least on the teen’s side) pretty much right. While the film doesn’t claim to speak for anyone but its fourteen-year-old protagonist Annie Cameron (Liana Liberato), the script by Andy Bellin and Robert Festinger, the direction by David Schwimmer (yes, the actor known for TV’s FRIENDS) and Liberato’s performance all do an impressive job of putting forth the specific complexities of what can happen in a young mind once this situation occurs.

Annie wouldn’t seem to be a prime candidate for exploitation. She’s the middle child in a happy, middle-class home, where dad Will (Clive Owen) and mom Lynn (Catherine Keener) still have enthusiastic sex in privacy. Oldest sibling Peter (Spencer Cumutt) is getting ready to go away to college, which is causing a few ripples of anxiety, but everything seems fine. Certainly nobody is worried about Annie’s Internet chat/text-message friend Charlie, a sixteen-year-old boy in California who talks soccer with her. Except Charlie finally confesses that he’s a little bit older than he’s let on – he’s twenty. Annie processes this, but decides it’s okay, even flattering, that an older boy finds her interesting. Then Charlie says he’s really twenty-five. Then he wants to meet up. And Charlie (Chris Henry Coffey) turns out to be even older and, because he knows exactly what to say, gets Annie to come with him anyway for the rest of the afternoon.

What happens after that might remain a secret forever, but one of Annie’s friends sees the Annie and Charlie of them together and tells a school official. The police and Annie’s parents are called and TRUST really gets down to business.

Since Owen is the adult star here, and he’s done a lot of avenger roles, there may be a knee-jerk expectation as to where things will go, but TRUST turns out not to be that kind of movie. Indeed, a good portion of the film involves Will dealing with his inability to exorcise his ferocious desire for revenge, as even the FBI is having difficulty tracking down the offender. TRUST even suggests that in any case revenge doesn’t have much to do with helping Annie, at the same time that Annie tries to justify her violation to herself and to others.

Although some elements are overly slick here – yes, we are in an economic and emotional comfort zone (until crisis strikes) that seems to exist much more in the movies than in many viewers’ lives – the direction, screenplay and performances all combine to do one of the more realistic jobs on record of depicting the schism between conventional wisdom and actual human feeling. TRUST even has that screen rarity, a reputable and competent therapist (a wonderful Viola Davis) who does not intrude but instead ever so gently tries to get Annie to come to her own conclusions.

Owen effectively portrays an intelligent man way out of his element, getting strong support from Keener as his more intuitive but equally anguished wife. Liberato is very fluid and realistic as Annie, while Coffey is scarily normal and calm as the fulcrum of the story.

Made with advice from the Los Angeles-based Rape Foundation, TRUST is likely to strike chords of recognition with anyone who has dealt with situations similar to the one in the film. It is also moving, thoughtful and a lot more insightful than most of the dramas dealing with the issues it tackles.