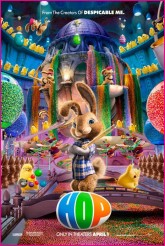 Pixar’s made their mark, Dreamworks Animation has their brand and even Blue Sky has a decent track record with their ICE AGE movies. Who would have figured that Illumination Entertainment housed at Universal would be the new cool animated kid on the block?

With last year’s DESPICABLE ME and the just released HOP, they’re eking out their own cool identity with films that appeal to kids, but are fun and tolerable for adults as well.

Frankly, I never expected DESPICABLE ME to be as good as it was, and to be honest, I did not expect HOP to be anything but disposable kiddie entertainment.

Boy, was I wrong.

HOP is a hybrid animated/live action film from director Tim Hill who did similar wonders on 20th Century Fox’s first ALVIN AND THE CHIPMUNKS movie.

The attempt here is at creating a potential perennial Easter Day classic and it succeeds with flying colors dealing with the story of the CGI animated Easter Bunny (voiced by Hugh Laurie) who is about to hand down the Easter throne to his son E.B. (voiced by Russell Brand). However, E.B. doesn’t want the responsibility. He’d rather be a drummer in  rock band and runs away from home a few days before Easter and lands in Hollywood.

There, E.B. runs into, sorry, make that, is ran over by thirtysomething slacker Fred O’Hare (James Marsden) who is just as directionless.

Fred is a little concerned that the bunny he ran over can talk and poop out jelly beans, but soon discovers the truth and it’s up to the two of them to save Easter from a ruthless chick named Carlos (voiced by THE SIMPSONS Hank Azaria) at the Easter Bunny’s home base (on Easter Island). Carlos plans to overthrow E.B.’s dad and take his place at the throne as the Easter Chick.

Hill knows pacing when it comes to children’s films and keeps HOP light and friendly. The CGI animation, particularly in the Easter Bunny factory is glorious – one of the most magical re-interpretations of the Easter Bunny mythology ever.

Brand also does a great job of toning down his adult shtick to create a very likable and PG-accessible E.B.

The live action portion of the film, particularly Peter’s attempts to get a job (and E.B. screwing it up) and a rather weird detour involving David Hasselhoff are a little too goofy (and in Hasselhoff’s case seriously will ultimately date the film consdierably), but these asides are not enough to torpedo a rather solid film.

HOP is fast, very funny and filled with exceptional animation. There’s no doubt this film will enjoy repeated viewings year after year and could very well spawn endless sequels. It’s amazing that outside of those old Rankin/Bass cartoons that nobody has attempted to do an Easter Bunny movie on this scale. C

Here’s hoping Illumination can continue this winning streak. They understand story, comedy and animation and while no one can supplant Pixar, certainly there’s no harm in trying.