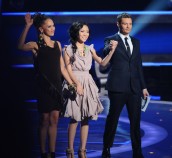 So who will it be? Last week was a total 180-degree turn from where the audience had been voting previously, so maybe anything can happen.

Instead, let’s just get to it.

Lauren Alaina and Scotty McCreery sing first and both are safe for the night.

Jacob Lusk and Naima Adedapo joined the stage for a duet. Jacob is safe. Naima is the bottom three.

Finally, Paul McDonald, Casey Abrams, James Durbin and Stefano Langone take the stage. Casey is safe and once again I wonder just if there are some shenanigans going on since Seacrest basically told him he got a ton of votes. James is safe. Stefano is safe and Paul is in the bottom.

Well, well, well, what have we here?  In case you missed what I said about Paul about his performance last night, in summary, I said I didn’t think this was the type of music tweens and other people would enjoy. And regardless of how cute he may be, it sucked and he should be in the bottom (even if I thought he wouldn’t, I though Stefano was going in again). Looks like I wasn’t the only one thinking that.

Final results, are in and who goes home? Thia and Naima go home. Paul is safe.

The tweens win again! They have knocked out not just one chick, but two. And so far only chicks have gone home, leaving only Lauren, Haley and Pia. All the men are left.

Will it change now that the numbers are dwindling? We’ll find out next week.

Check out the brand new photo of the Final 9 below.

AGREE? DISAGREE? WHO SHOULD HAVE BEEN VOTED OFF? COMMENT BELOW! 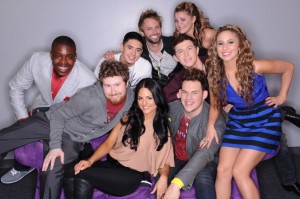