Casey Abrams, James Durbin, Lauren Alaina, Scotty McCreery and Pia Toscano rock the house, others not so much

We are on week two of the world’s greatest karaoke competition, AMERICAN IDOL, and after losing Ashthon Jones and having all females in the bottom three, I made the argument that once again despite all the changes in format that the tween 13-year-old girls are dominating the voting bloc.

Now, obviously, it may be too early to tell but if we end up with all the chicks going first in the first few weeks, it will probably ring true because while three of the guys are solid (James, Casey, Jacob), some of the chicks aren’t bad either (Pia, Lauren). Time will tell.

One thing for sure, the ladies didn’t really help themselves out tonight, especially those struggling already after the first week. But instead of spilling the beans now, let’s get to it. This week, the contestants are singing the songs from the year that they were born.

So let’s roll out the red carpet, stuff the goody bags, get interviewed by numerous press members, stop and have our photograph taken, listen to long boring acceptance speeches, get played off by the band and get this (singing) award show going. 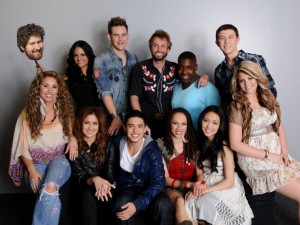 Naima Adedapo – Last week, Naima wasn’t in the bottom three yet was one of the judges’ wild cards of the season. Singing “What’s Love Got to Do With it” by Tina Turner was a good a song choice as it plays right into her breadbasket … well, at least, you would think it would. It wasn’t very good at all. The fact she looked like some ’80s reject parrot didn’t help either. It was very bad cruise ship karaoke. Not looking good for Naima this week. Not sure what Steven Tyler was smoking because she was terrible.  Grade: C-

Paul McDonald – Skinny guy in a little coat …. Skinny guy in a little coat …  Much like J.Lo said last week about Paul that the public won’t “get” him, I don’t get him either, but maybe for the tween voting bloc all they need is a pretty face. Surely, singing Elton John’s “I Guess That’s Why They Call It the Blues” won’t win him over for sure with them since they probably have no clue about the song. And what was with the weird dancing here and the little jigs there? If milquetoast and lackluster had a baby it would be called Paul’s performance. Grade: C-

Thia Megia – Let’s be honest, Thia should have been the one to go home last week. She sucked. Frankly, I hate the fact she does only ballads because I think it’s a crutch. Yet, instead of changing it up and going big … she performed “Colors in the Wind” by Vanessa Williams. Yep, I was nodding off after the first verse. She looked good, she sounded good, but I think it is way too old fashioned and boring and the majority of people watching IDOL won’t give a damn about how well she sounded or how good she looked but will instead think … “What the hell was that song?” Grade: C

James Durbin – The good news for James is that he continues to pick the right songs, which is nearly half the battle on IDOL. Picking Bon Jovi’s “All Be There For You” (which may be another first for IDOL) allowed him to not only have his screaming moment that we have become used to, but allow him to actually sing. Very nice performance too and I like that IDOL is mixing it up in terms of what they are offering the contestants in terms of fireworks, backdrops and who they have on stage with them, it is a nice touch. This wasn’t his best performance by a long shot and I agree with Steven about not getting too poppy, but gotta give him credit, James is fun. Grade: B

Haley Reinhart – Ohhh, poor Haley was an ugly baby. Luckily, she’s totally cute now so no one cares. I guess until she came out in a total hooker outfit and then smeared her lipstick all over her face. Didn’t anyone tap her on the shoulder and say … “Listen, I know you want sexy, but girl, you’re going for whore central here.” Seriously, who allows them to go on stage wearing that? Anyway, Haley needed to go big because she was in the bottom three and that’s never a fun place to be. She chose “I’m Your Baby Tonight” by Whitney Houston and despite the hooker outfit, it wasn’t bad. But, it wasn’t great either and she is having an identity crisis as the judges said. Grade: C+

Stefano Langone – You know what cracked me up most about Stefano’s look back … he was totally going gangster. That’s hilarious given all he does is sing boring ass, sappy ballads. Shockingly, he decided to sing “If You Don’t Know Me Know” by Simply Red – another freaking ballad. Hey Stefano, we get it. We know you can sing to the ladies and sing their pants off. We know you are probably banging new IDOL groupie chicks every week. You don’t have to shove it in our face week after week after freaking week. This is why dudes give you bad looks when you go to Ralph’s or when you visit the beach. Maybe you can try, just try, to tackle an upbeat song one of these days, eh? Props that you sang it damn good. Grade: B

Pia Toscano – Hey, I just realized something … what happened to IDOL trying to be hip and modern? Instead we get songs from the late ’80s over and over again? Makes me go “Hmmm.” I gotta say Pia’s “Where Do Broken Hearts Go” by Whitney Houston wasn’t my favorite performance from her, I don’t know why. Maybe because I don’t like the song to begin with. Regardless, she sang it solid and continues to deliver the goods each week. She’s very strong and very talented (and did I mention totally hot?). I don’t think she has anything to fear this week. She may be the most solid vocal performer in the competition, right up there with Jacob. Grade: B

Scotty McCreery – Every time I hear Scotty perform, I crack up. No, not because he looks like a live action Alfred E. Neuman. No, not because he does that weird thing with his lips, but because the kid knows exactly what he is doing in this competition. He’s got it down pat. He’s going country or going home. And he knows that picking the right songs that appeal to Middle America and teen fans that love country is enough to get him over even if he has issues with the way he sings it. But Scotty doesn’t have issues with his singing because he’s nailing it every time. He also proved he can do something more up-temp and higher with Travis Tritt’s “Can I Trust You with My Heart”. Grade: B+

Karen Rodriguez – Karen’s one spicy chica. She’s hot as balls. I thought given she was voted through into the Top 10, that the Latin bloc were going to be a strong force in the competition this year. But last week, she was in the bottom three making me re-think that whole idea. This week will be interesting because Karen went with “Love Will Lead You Back” by Taylor Dayne, not a very upbeat song and one not a lot of people her age would even know. So I’m not sure if she will convince people who didn’t vote for her last week to send her a vote. And the performance was fairly lousy and I still don’t think mixing in Spanish with her songs is a great idea (talk about alienating Middle America), but maybe the Latin bloc gets back on track and puts her through. Like I said, it will be interesting. Grade: C

Casey Abrams – Haha, Casey wasn’t a very cute kid either but unlike Haley, he stayed that way. Poor guy. Luckily, he’s got that next-door look and he’s got a lot of charm. Oh, did I mention he also is a great performer? Singing Nirvana’s “Smells Like Teen Spirit” (yet, another first on IDOL) was a bold move but that song still gets regular rotation on radios today. So, it is of course gonna resonate not only with tweens who know the song, but with the public that grew up in the generation that the song defined. He talked about taking risks and how much of a risk it was to sing this song … this wasn’t a risk, it was a brilliant move. Something that everyone will rock out and connect with. Casey shines again. Grade: A-

Lauren Alaina – Uh, could the set up to seeing Lauren sing be any more awkward? Seacrest didn’t want to put on whatever she was giving him and couldn’t wait to get her away from him. Hey Seacrest, we know you value your sexual ambiguity, but suck it up and let the chick do her silly gag on you, dummy. It just makes people hate you even more than they already do, jackass. Singing Melissa Etheridge’s “I’m the Only One” fit right into her wheelhouse and despite having the flu, she did a much better job than last week, showing why the judges wanted her in finals. Not a fan of that outfit but I can live with it. Grade: B

Jacob Lusk – Well this was definitely a different side to Jacob singing “Alone” by Heart but not necessarily a good one. It was not that great to be honest. I love Jacob and think he has some serious pipes and a wonderful mastery over his vocals but this did nothing to showcase those talents which are his strength. I don’t think he will be going home but this was not his best performance, not by a long shot. I know the judges loved it but I just thought it was not the right song for him. Grade: C

I think Naima will be the one to go home.