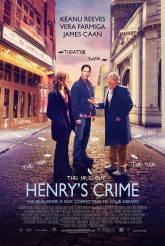 HENRY’S CRIME puts together two elements audiences don’t see every day: bank robbery and a stage production of Anton Chekhov’s THE CHERRY ORCHARD. The tone is gentle, slightly deadpan and droll and the pace is measured, starting slow, but delivering delightful results.

Keanu Reeves plays Henry, a Buffalo, N.Y. toll booth operator gamely trying to keep his marriage together with frustrated wife Debbie (Judy Greer). When old friend Eddie Vibes (Fisher Stevens) drops by and insists that Henry fill in for a sick guy on a softball team, the go-along, get-along Henry agrees. It’s not until he’s asked to wait in the car in front of a bank that he notices the vehicle has been hot-wired.

Before he can do anything with this knowledge, the bank has been robbed, Eddie and Co. have fled on foot and Henry is left as the only arrested suspect. Since Henry won’t incriminate even a non-friend like Eddie, he does three years in jail, where he is put in a cell with lifer Max (James Caan). Debbie leaves Henry while he’s in prison. On his release, Henry is clipped by a car driven by actress Julie (Vera Farmiga).

Thanks to unexpected inspiration, Henry decides to plan a heist of the bank he was falsely convicted of robbing before. For this, he knows he needs Max’s help. Max resists, but once he’s on board, he deduces the only way for the plan to work (don’t ask, it makes sense when we get there) is for Henry to play Lopakhin in the production of THE CHERRY ORCHARD that Julie is currently rehearsing in the starring role.

There’s a sense that writers Sacha Gervasi & David N. White, working from a story by Stephen Hamel and Gervasi, may have been inspired by the old Ealing Studios comedies that starred Alec Guinness and other British luminaries of the day. However, HENRY’S CRIME is actually kinder-hearted than most of the older films, with Henry reiterating that he doesn’t want guns, even fake ones, because he doesn’t want anybody getting hurt.

Director Malcolm Venville resists the temptation to go broad with the Chekhovian scenes, so that the neurotic actors and their temperamental Eastern European director (a very funny Peter Stormare) all comfortably coexist in the same universe as Henry and Max. As Henry is inexorably drawn into Julie’s world, courting her with text and performance, the effect is low-key and beguiling. Venville also has a visual sense that economically conveys an external bleakness without making the environments either unlivable or otherworldly.

Reeves’ face lets us in on every thought that Henry has; he’s expressive here without ever overdoing it. As for Farmiga, she is luminous, sexy and altogether wonderful – we need no explanation as to why Henry is swept away by her. Caan keeps Max in a state of perpetual mild disbelief, with enough underlying danger for us to believe he is still a man of force. Stevens is creepy in contained fashion and Bill Duke makes a cumulatively powerful impression as a bank guard.

HENRY’S CRIME is quieter than either of its genres leads one to expect but, perhaps because of this, it provides a lot of fun throughout.