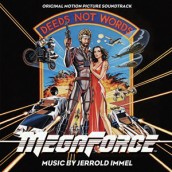 A goofily great score to a campy 1980s action opus

Immel had the macho sound of TV scoring down with the likes of HARRY O and POLICE WOMAN when America’s first line of motorized defense came knocking at his studio in the tight-fitted form of Bostwick as “Ace” Hunter. Immel rose to the not-too-serious challenge with the rocking synth pads that any connoisseur of the decade’s action cheese would dig- “dated” electronics whose awesome, unrepeatable sound such scores as SCOTT PILGRIM and TRON LEGACY are now doing their damnedest to replicate. And of course, a score like this has also got to have those overly heroic orchestrations you half expect to be interrupted by a commercial break. o

Once you get over your sniggering, so-bad-it’s-good self, MEGAFORCE, taken for what it is, is actually really good. As DALLAS could attest to, Immel certainly had a way with themes. And MEGAFORCE’s have a punchy, camp-catchiness to them, starting right off with a trumpeting brass section. Immel then gets his groove on for this parade of mega-vehicles and good guys with bad hair, giving the synth and symphonic action (complete with disco-ready romance) the kind of boisterous energy that puts some of today’s more evolved, but by-the-numbers sample-driven action scores to shame.

With exceptional liner notes by Randall Larson that treat the film and soundtrack with knowing respectability, the bleeps and brass of MEGAFORCE’s danceable action stylings make for a refreshing blast from the mullet past.

Fans of Barry Bostwick’s more renowned cult movie can wear their black fishnet stockings with pride. So if you delight in the electronic whooshing and swaggering strings that embody all that is wonderful about 80’s “silly” scoring, then buy and blast MEGAFORCE with pride.